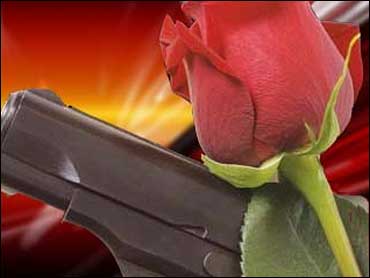 Police in South Carolina gave away roses on Valentine's Day. All you had to do to get one for your sweetie was turn in a gun.

Hoping to get the weapons off the streets with the "Guns for Roses" program, authorities in two central South Carolina cities set up a program where anyone who turned in a gun received a free rose and a Best Buy gift card.

At a Columbia church, five cars lined up to give away guns before the exchange had even started. About an hour and a half later, police had collected 75 weapons.

A handgun was worth a $100 gift card, while a rifle or shotgun netted a $50 gift certificate. Cowan said one man turned in six handguns, worth $600 in gift cards.

But there was no amnesty for those turning in the guns. The weapons were checked to see if they were stolen, names and addresses were jotted down and ballistics tests would also be done to see if the firearm was used in a crime.

Cowan said the idea was spawned in part by Columbia Police Chief T.P. Carter and Richland County Sheriff Leon Lott, who has made headlines recently for investigating Michael Phelps after a photo surfaced showing the Olympic swimming champion smoking a marijuana pipe. The program was modeled after a California one; similar exchanges have been done in New York and San Francisco.

Cowan said gun donors were young and old, men and woman. Many had a big smile and some said it was a relief to get rid of the weapons.

And did the men even care about the rose?

"Most of them have taken it," Cowan said.