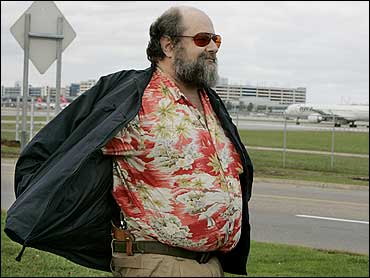 Flying in the U.S. has been transformed since Sept. 11, with passengers forced to remove their shoes, take out their laptop computers and put liquids and gels in clear plastic bags. Yet it's perfectly legal to take a loaded gun right up to the security checkpoint at some of the nation's biggest airports.

An Associated Press survey of the 20 busiest U.S. airports found that seven of them - Philadelphia, Detroit, Phoenix, Minneapolis/St. Paul, Dallas/Fort Worth, Los Angeles and San Francisco - let people with gun permits carry firearms in the general public areas of the terminal.

Some anti-terrorism experts say that is a glaring security loophole that could endanger airport workers, passengers and people waiting to pick them up or see them off. Some suggest that allowing guns in terminals is practically asking for them to be smuggled aboard a plane.

"If your airport is not secure, then the security of your airplanes is jeopardized," said Rafi Ron, former security chief at Ben Gurion Airport in Israel who now works as an aviation consultant. "You cannot separate the two."

Other authorities say the nonsecure areas of the terminal are no different from other public venues and do not warrant special restrictions.

"It's really not more of a concern than at a mall or a train station," said Philadelphia police Lt. Louis Liberati.

Under federal law, it is illegal everywhere to try to carry a gun through a security checkpoint. The rest of the terminal, however, has long been the domain of state and local authorities.

Jon Allen, a spokesman for the federal Transportation Security Administration, said the TSA has not taken a position on guns in airports and has no authority under federal law to ban them.

The issue has led to clash in Georgia between a new state law that allows guns on public transportation and the Atlanta airport's ban on loaded weapons. Last month, a federal judge dismissed a lawsuit brought against the city by a gun rights group. At an earlier hearing, he warned that guns at the world's busiest airport could pose a "serious threat to public safety and welfare." The gun group has appealed.

Rep. Bennie Thompson, D-Miss., the chairman of the House Homeland Security Committee, was surprised to learn that airports have been allowing weapons for years, and warned that Congress could move to ban the practice. In a July letter to TSA, Thompson called guns in terminals "a threat to the safety of airline travelers."

However, even at those airports that ban guns, officials are not frisking people or using metal detectors on them as they enter the terminal. Experts say an additional layer of security like that would be unworkable at America's bustling airports.

In 2002, an Egyptian immigrant killed two people and wounded several others near a ticket counter at the Los Angeles airport before he was shot to death by an El Al Israel Airlines security guard.

Some gun owners who take their weapons to the airport cite the need for protection. Others carry a gun frequently and say they do not want to be bothered finding a place to stash it if they go to the airport.

Joel Rosenberg, a firearms instructor in Minneapolis, said he regularly carries a gun to the city's airport and has not heard of any problems caused by the policy.

"People who are law-abiding are going to be law-abiding whether they have a .38 snubby on their hip or not," he said.

Some airports that allow the guns say they are trying to accommodate the culture of their patrons.

"We like our guns in Michigan," said Scott Wintner, a spokesman for Detroit Metro Airport.

Similarly, Brian Murnahan, spokesman for the Dallas-Fort Worth airport, said his airport's policy is driven by pragmatism: Texans often carry guns. "While we certainly don't encourage people to bring guns to the airport, we are trying to be reasonable," he said.

The state's other major airport has a strict no-guns ordinance.

"It's posted everywhere," said Marlene McClinton of Houston-George Bush Intercontinental Airport. "But this is Texas," she said, explaining that the airport has cited some visitors for violations. Unlawful carrying of a weapon is a misdemeanor in Texas, punishable by up to a year in jail and a $4,000 fine.

Gun rights supporters say law-abiding citizens with guns could fire back and cut short a gunman's rampage. But Ron, the Israeli security expert, said the last thing airport security agents need is a hail of bullets and no idea who the bad guy is.

"That leads to chaos," he said, "and that can lead to tragedy."