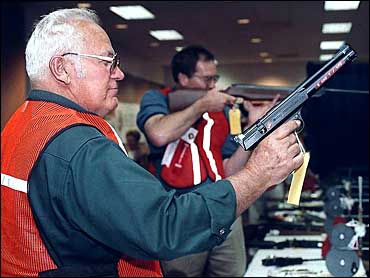 In his latest Against the Grain commentary, CBSNews.com's Dick Meyer draws a bead on the Second Amendment.

"A well regulated Militia, being necessary to the security of a free State, the right of the people to keep and bear Arms shall not be infringed."

Most Americans think that the Second Amendment of the Constitution provides individual citizens the right to have guns. (Which is not to say that most Americans believe that there should be a right to keep arms.)

Very, very few judges, prosecutors or government lawyers over the past 60 years (at least)have officially taken the position that an individual right to own guns exists. The normal, reigning judicial view, the one that is essentially settled law, is that the right to bear arms pertains only to the right of states form collective defenses or "well regulated militias." This is not a controversial area of the law. No gun control laws have been declared unconstitutional by courts because they violated an individual rights to bear arms.

But it is a controversial area of political and academic debate.

In politics, gun control advocates believe there is only a collective right to bear arms. Gun control opponents believe citizens have a right to keep arms every bit as profound as the rights of free speech, free assembly and free worship. These are matters of civic religion.

Modern scholars and constitutional lawyers are divided on the 200 year-old question of whether the Second Amendment provides an "individual" or "collective" right, and there is no shortage of vehemence on both sides.

The NRA has bankrolled the production warehouse full of individual right scholarship -- and propaganda. However, some very independent and liberal scholars have reexamined the debate, which has really been an academic non-issue for a century, and came out on the individual rights side. It's like the nature vs. nurture debate: there ain't gonna be a winner.

Attorney General John Ashcroft, entrusted with collective security for the world's most powerful country, wants to settle the question once and for all, in a way that would eventually make it easier for individuals to have guns. Alien scientists and foreign anthropologists would be fairly mystified by this anti-Darwinian state of affairs.

Ashcroft has always believed in the individual right to have guns. His Justice Department, in an extreme break from what judges and presidents have done for decades, is trying to establish that view of the Second Amendment as the law of the land in order to eventually rein in federal, state and local gun control laws.

In footnotes to court briefing filed this week, Ashcroft's solicitor general flatly asserted that, "The current position of the United States, however, is that the Second Amendment more broadly protects the rights of individuals, including persons who are not members of any militia or engaged in active military service or training, to possess and bear their own firearms, subject to reasonable restrictions designed to prevent possession by unfit persons or to restrict the possession of types of firearms that are particularly suited to criminal misuse." (Remember, attorneys general don't make law; Congress does.)*

This was expected. Last May, the new attorney general declared his position not in a legal brief, not in congressional testimony, but in a letter to an interest group, the National Rifle Association. In November, Ashcroft reiterated his view in a memo to U.S. attorneys across the country.

Now another round has been fired. And there are a few federal judges shooting at the same target. Second Amendment law has moved like a glacier for more than a century. The Supreme Court last dealt with the issue directly in 1939 when it clearly backed they collective, no-individual right position. Now that glacier is under a sun lamp and it's melting fast.

So the time for pussy footing around is over. It's time to repeal the Second Amendment. Bag it.

What the founders intended is unknowable. Objective truth about the meaning of the Second Amendment does not exist. Practical consensus about its meaning will not endure. The concept of "well regulated militia" is an anachronism in the 21st century.

So let's get rid of it and address the life and death issues of gun control directly, away from the shadows and phantoms of civic theology. We do just that with other extremely dangerous mechanical devices that individuals use -- cars, boats, airplanes.

At least one key player in this battle thinks tinkering with the Constitution is no big deal -- John Ashcroft. During his six years in the Senate, he sponsored seven constitutional amendments -- a ban on abortion, a ban of flag burning, for a line-item veto, mandated balanced-budgets, super-majorities for tax increases, term limits and an amendment to make it easier to amend the Constitution.

* Note: An earlier version incorrectly stated that "judges and Congress" make laws. I apologize for the careless error.