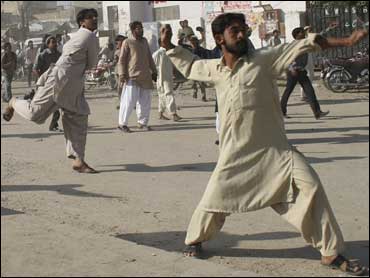 Three supporters of Pakistan opposition leader Benazir Bhutto were killed Saturday when gunmen attacked her party's office in a town in southwestern Pakistan, police said, in the first reported deaths in the current election campaign.

Officers were investigating the incident, which occurred in Naseerabad, about 150 miles east of Quetta, the capital of Baluchistan province, said Wajid Akbar, the district police chief. Police had no immediate information about the motive for the attack or who was behind it, he said.

Although killings and other violence have been common in past elections in Pakistan, the bloodshed in Naseerabad is the first such incident in the campaign for parliamentary elections scheduled for Jan. 8.

Pakistan has been engulfed in a political crisis since Nov. 3, when President Pervez Musharraf imposed emergency rule and fired Supreme Court justices who were preparing to rule on the validity of his October re-election.

He then replaced the fired judges with his loyalists, who promptly dismissed all complaints against the former general's election.

Since then, Bhutto and another former prime minister, Nawaz Sharif, whose government was ousted by Musharraf in a coup in 1999 - have been trying to reach agreement on a set of demands that would allow their two parties to participate in the ballot. Both have accused Musharraf, who retired from the army last month before being sworn in as a civilian president, of planning to rig the elections.

Sharif, who leads the conservative Pakistan Muslim League-N party, has been pushing for a boycott of the vote, a move that would undermine Musharraf's U.S.-backed efforts to transform his military dictatorship into a democratic, civilian administration.

He has insisted that the Supreme Court judges sacked by Musharraf be reinstated before the vote. But Bhutto, a two-time prime minister who also recently returned to her homeland after nearly eight years in exile, has indicated she would prefer to reinstate them after the elections.

Representatives of Bhutto's Pakistan Peoples Party and the Pakistan Muslim League-N have said they will continue talks on two remaining sticking points in their demands, after announcing they had already reached agreement on 15 issues.

They would not specify the demands for their participation in the election until they are endorsed by their leaders. But media reports said they were also divided on the issue of giving the government a deadline to agree to their conditions after which they would collectively pull out of the campaign.