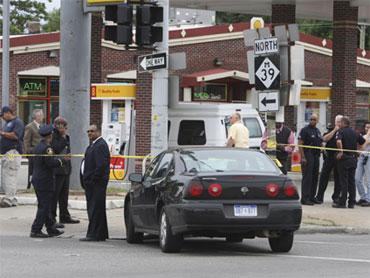 Gunmen in a green minivan opened fire on a group of teenagers waiting at a bus stop near a Detroit school on Tuesday, wounding seven including three who were in critical condition, authorities said.

Five of the teens had just left Cody Ninth Grade Academy, where they were taking summer classes, when they were shot at the nearby bus stop.

The gunmen exited a vehicle and "asked for a person by name" before they "opened fire at the crowd," said Detroit Public Schools Police Chief Roderick Grimes.

Detroit Police were looking for two suspects in a green minivan, said spokesman Rod Liggons. Officers were interviewing some of the victims in the hospital Tuesday evening, he said.

The teenagers, four boys and three girls, range in age from 14 to 17 years old, Liggons said. Three of the teens were in critical condition, he said.

Gas station owner Steve Hakim said he saw two people with T-shirts covering their heads run across his lot toward the bus stop. Then he heard about 10 gunshots, saw a boy and a girl fall down and called 911.

"It's pretty scary," Hakim said. "Somebody's got to do something."

Police were reviewing video taken from the gas station's security cameras and took a disc containing the footage, Hakim said.

Another summer school student, 15-year-old Bria Wilson, said she was standing at the bus stop when she heard the gunfire. She said she was facing away from the shooters and ran away after the shots were fired. But she saw a 16-year-old male friend lying on the ground, bleeding.

"They were so close - it almost hit me," she said.

Schools spokesman Steve Wasko said there was "nothing that we're aware of at this time" linking the shootings with any fight or dispute at the school.

He said the shootings happened about 2:15 p.m., about 15 minutes after summer school students were dismissed for the day.

Imam Abdullah El-Amin, who co-owns the Numan Funeral Home near the intersection where the shooting took place, said drug-dealing, prostitution and "hopelessness" are common in the area, he said.

"It's terrible that these things are just laying there, festering, in society - time bombs waiting to happen," said El-Amin, a Muslim minister and candidate for Detroit City Council.