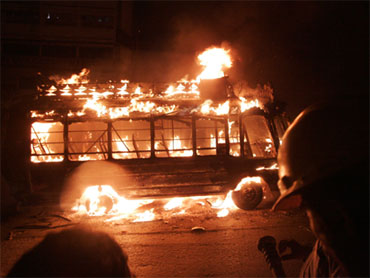 Security forces are struggling to regain control of Pakistan's largest city after 45 shooting deaths and unrest that saw dozens of vehicles and shops set ablaze.

The violence in Karachi began with the assassination of a prominent lawmaker Monday, which set off a cycle of revenge attacks.

Police said that in addition to those killed, 93 people were injured, according to data from state-run hospitals.

On Tuesday police and paramilitary troops patrolled deserted streets in Pakistan's main commercial hub. Most business in the southern city of more than 16 million had ground to a halt, and schools were closed.

But gunfire could still be heard Tuesday morning, and fires were still being set in some areas.

Twenty people have been arrested in connection with the violence, federal Interior Minister Rehman Malik told the Senate on Tuesday.

While a thriving trading center, Karachi has a history of political, ethnic and religious violence and has long been a hide-out for al Qaeda and Taliban militants.

"Pakistan's insurgency threatens democratic gains," said CBS News foreign affairs analyst Pam Falk, "it has its own violence from al Qaeda and Taliban extremists, which has become more complicated with the spillover from the Afghanistan war."

The violence came as natural disaster beset residents of Pakistan's northwest. by the worst monsoon flooding to hit the region in decades, and anger at the government for what has been deemed an inadequate response was simmering.

The latest unrest came after Raza Haider, a provincial lawmaker, was shot dead along with his bodyguard in a mosque in Nazimabad area while preparing to offer prayers Monday.

The government blamed the Taliban and the banned militant group Sipah-e-Sahaba Pakistan (SSP) for the killing of the lawmaker, whose funeral Tuesday was attended by thousands of mourners, relatives and activists.

Police and officials said that they also found evidence suggesting that militants had planned a suicide attack during Haider's funeral. But the ceremony passed off peacefully.

Haider was a member of the Muttahida Qaumi Movement, the political party that runs the city and represents mainly descendants of migrants from India who settled in Pakistan when it was created in 1947.

The MQM's main nemesis is the Awami National Party, a secular nationalist party whose main power center is Pakistan's northwest and whose base is the ethnic Pashtun community.

Within hours of Haider's assassination, gangs torched buildings in Karachi and gunfire erupted in several parts of the city. Many of the dead were killed in targeted, execution-style attacks, authorities said. An investigation had been ordered into who was behind the attacks.

Falk reports that Pakistan's U.N. Ambassador said that Pakistan is receiving substantial aid in fighting insurgents, but he doesn't think it is enough; he told CBS News, "Much more is needed. I'm going to say: Please do much more. We need to fight this menace, and we need to do it properly." 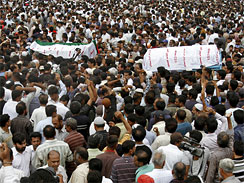 (AP Photo/Shakil Adil)
Officials did not say who was to blame for the violence.

"It is very sad, and we believe that it is the work of those forces who want to destabilize the elected government," Sindh province spokesman Jamil Soomro said.

(Left: People carry the bodies of Raza Haider, leader of the Muttahida Quami Movement, and his bodyguard, who were killed Monday by unknown gunmen, for burial in Karachi, Aug. 3, 2010.)

While violence is still common, the city was far more dangerous in the 1980s and 1990s when there were regular outbreaks of political and ethnic slayings that left dozens dead each week.