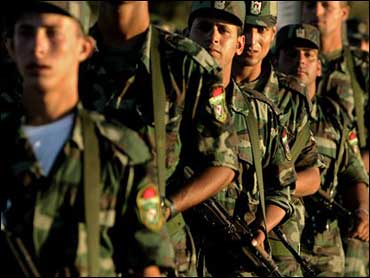 Hundreds of Palestinian security forces loyal to President Mahmoud Abbas went on a rampage against the Hamas-led government Monday night, riddling the parliament and Cabinet buildings with bullets and setting them on fire in retaliation for an attack by Hamas gunmen.

Fatah gunmen briefly abducted a Hamas lawmaker during the rampage.

The Al Aqsa Martyrs' Brigades, a pro-Fatah militia, later issued a statement saying Rabei had been released. There were no immediate details on his condition.

The security men shot out the windows of the parliament building before storming the two-building Cabinet complex, where they smashed furniture, destroyed computers and scattered documents. No casualties were reported.

The mob then set fire to one of the Cabinet buildings, gutting the building's fourth floor. When a fire engine approached the scene, one gunman lay on the road in front of it, preventing it from reaching the building.

"Every time they touch one of ours in Gaza, we will get 10 of theirs in the West Bank," said one member of the Preventive Security force, which is loyal to Abbas' Fatah movement.

Dozens of gunmen from the Al Aqsa Martyrs' Brigades, a pro-Fatah militia, joined the security men.

The rampage followed an earlier attack by Hamas gunmen on a Preventive Security installation in Gaza. The attack set off daylong clashes that left two people dead and 14 wounded.

Abbas has been locked in a bitter power struggle with Hamas since the Islamic militant group beat Fatah in January legislative elections. Hamas now controls the parliament and Cabinet.

The power struggle has revolved around control of security forces. With most forces loyal to Abbas, Hamas has deployed its own private militia in the Gaza Strip, raising tensions between the sides.

At the time of the rampage, Abbas was in Gaza, where he has been negotiating with Hamas in hopes of ending the political deadlock.

Parliament backed off a threat to derail Abbas' referendum on statehood — a proposal that would implicitly recognize Israel's right to exist.

With its 69-6 vote, the parliament delayed a showdown with the moderate Abbas until June 20. Lawmakers said the move was to give negotiations between Hamas and Abbas' Fatah movement a chance to succeed.

"If we had voted against the referendum today, the gap between us would have become too wide," said independent lawmaker Hassan Khreishe, the deputy parliament speaker. "We are giving more chance for dialogue to go ahead."

Hamas lawmakers challenged the legality of Abbas' Saturday decree setting a July 26 referendum on the plan, which calls for a Palestinian state alongside Israel, effectively accepting the Jewish state. Both sides are scheduled to meet later Monday.

Hamas is sworn to Israel's destruction and has killed more than 250 Israelis in 4½ years of violence.

Polls have indicated the public widely supports Abbas' plan. Abbas believes a victory in the referendum would help the Palestinians end crushing international economic sanctions against the Hamas government. He also says it would promote Palestinian statehood and diminish fighting between Hamas and Fatah that has killed 17 Palestinians over the past month.

Abbas set a date for the referendum despite an explosion on a Gaza beach Friday that killed eight civilians and inflamed passions against Israel. Palestinians said the deaths were caused by an Israeli artillery shell, but Israel has suggested its army may not be responsible and is investigating.

The referendum plans suffered a further setback Sunday when a Hamas prisoner who co-authored the proposal withdrew his support.

Abdel Khaleq Natche accused Abbas of exploiting the document for political gain. He and other Palestinian prisoners held by Israel carry great clout in Palestinian society.

The stormy legislative session on the referendum Monday began with several hundred government employees demonstrating to demand salaries that have been withheld for more than three months because of the Western aid cutoff. The United States and Europe list Hamas as a terrorist organization.

Dozens of angry demonstrators banged on the chamber door after the session began.

Fatah legislator Saeb Erekat urged lawmakers to "rally around efforts to unite the people, not divide them."

Israel-Palestinian violence has shot up since the beach explosion and the killing by Israel a day earlier of a senior Palestinian militant, with Hamas officially calling off a 16-month truce.

Israel suspended its artillery fire against rocket-launching operations until it concludes its investigation into the Gaza beach killings.

Although the Palestinians rockets are inaccurate and often do not cause casualties, they have disrupted life in Israeli towns near the Gaza border.

Peretz, who lives in one of those towns, told a meeting Monday of his Labor Party there was a limit to Israel's restraint.

"No one should have any illusions: I want to bring calm," he said. "(But) if there is no choice, we will do all we have to do without any restraint."