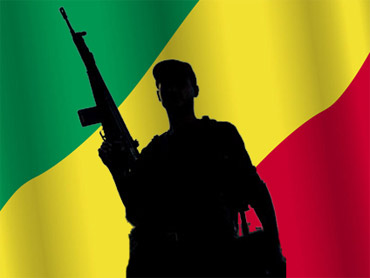 Gunmen in eastern Congo fired Wednesday on a private plane carrying international aid workers who escaped into the forest, the regional director of International Medical Corps told The Associated Press.

A U.N. official said the aid workers were rescued later Wednesday by peacekeepers. He said a Congolese soldier and two militiamen were killed in the firefight. The official spoke on condition of anonymity because he is not authorized to speak to reporters. IMC officials could not be immediately reached to confirm the rescue.

IMC regional director Miel Hendrickson said earlier that the endangered staff of the Los Angeles-based medical aid group were three Americans and one Georgian who were on the aircraft, and two Congolese staff who were at the landing strip outside Walikale mining town when the shooting erupted.

Hendrickson said Wednesday's attack comes a few weeks after a Russian pilot was kidnapped at Walikale airport. The whereabouts of the foreigner who piloted Wednesday's plane were not immediately clear.

The aid workers are in a team treating scores of people raped in rebel attacks July 30 to Aug. 4 in villages about 40 miles from Walikale.

Hendrickson said the number of people treated for rape in those attacks has risen to 242 from 192 last week. More and more survivors who had fled into dense forest have been coming out of hiding each day - some women completely naked, according to aid workers.

The attacks took place within miles of a U.N. peacekeeping camp for about 80 Indian soldiers, and thousands of Congolese troops based at Walikale, a 90-minute drive from the villages, raising questions about why nothing was done.

Those raped include four baby boys, one just a month old, and a great great-grandmother who was said to be 110 years old, according to civil society leader Charles Masudi Kisa.

Survivors have said their attackers were from the FDLR rebel group led by perpetrators of the Rwandan genocide who fled across the border to Congo in 1994 and have been terrorizing the population in eastern Congo ever since, along with Congolese Mai-Mai militia. The Rwandan rebel group has denied the reports.

On Tuesday, the U.N. envoy in charge of sexual violence in conflict urged Congo's government to prosecute the perpetrators, and also warned leaders of the rebel and militia groups that they could be prosecuted by the International Criminal Court because widespread and systemic sexual violence can constitute war crimes and crimes against humanity.

Hendrickson said initial reports indicated those who fired on the plane were from one of several Mai-Mai groups operating in the area.

Rape has become a weapon of war in eastern Congo, where rebels and soldiers are enriching themselves from mining precious minerals, often used forced and child labor. They have little incentive to end the conflict.

Congo's massive mineral resources have continued to fuel fighting in the east years after the rest of Congo enjoys relative peace following back-to-back civil wars that drew in armies from eight African nations in what became a massive international looting of Congolese minerals.