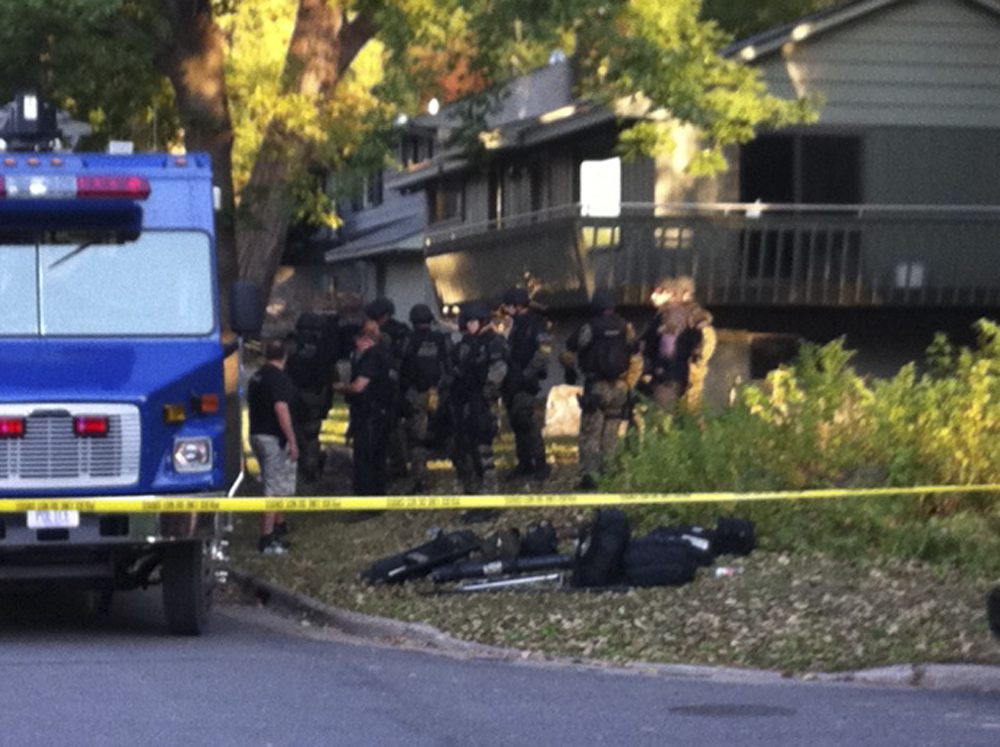 The victims' bodies were found shortly after officers arrived at Accent Signage Systems Inc., located in a residential area in the city's north side, after receiving a 911 call Thursday afternoon, according to a statement from police spokesman Sgt. Stephen McCarty.

"When officers arrived and entered the business to assist with the evacuation of employees, give aid to the victims and to search for the suspect, they found four victims dead from apparent gunshot wounds," the statement said.

Four other people were wounded, including three critically.

No details were released about the shooter, other than he was found dead from an apparent self-inflicted gunshot wound.

During a news conference Thursday night, Minneapolis Police Deputy Chief Kris Arneson wouldn't specify how many people had been killed, saying only that "several" victims were found dead inside. She said police never fired at the shooter, but she didn't release other details — including the shooter's possible motive or whether he had worked at the company.

None of the victims' names has been released.

Someone from inside the building called 911 around 4:30 p.m. to report the shootings, police said. The first officers on the scene quickly began evacuating people from the business and closed off several blocks.

Dozens of squad cars and SWAT officers swarmed the neighborhood Thursday afternoon, and traffic was stopped on a nearby bridge along Penn Avenue, where officers had rifles drawn and pointed at the business and a park below.

By Thursday evening, police vehicles were still surrounding the business. People from the neighborhood milled around but deputies kept them back.

Marques Jones, 18, of Minneapolis, said he was outside a building down the street having his high school senior pictures taken when he and his photographer heard gunfire that sounded close.

"We heard about four to five gunshots," Jones said. "We were shocked at what happened and we just looked at each other. We all just took off running to our vehicles."

According to Accent Signage Systems' website, the company makes interior signage and lists its founder as Reuven Rahamim. A phone messages left at the business was not immediately returned, and a woman who answered the phone at Rahamim's residential listing declined comment.

The company employed 28 people as of July, according to a feature on the business in Finance & Commerce, a local business publication. The paper reported that U.S. Under Secretary of Commerce Francisco Sanchez visited it in August in a trip focused on exporting, and praised the company for its innovation.

The company developed a patented technology for producing signs in Braille and had licensed out the technology to companies in 38 countries, the newspaper said.

Minneapolis Mayor R.T. Rybak said employees who were working when the shootings occurred were together and being cared for Thursday evening.

"We are deeply sorry about what has happened here," he said, calling the shootings "a horrible tragedy."