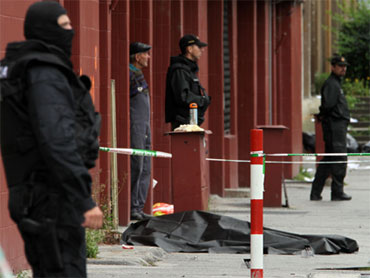 A gunman went on a rampage in Slovakia's capital, killing seven people and wounding 15, then committed suicide, officials said.

Five of the people killed Monday were members of a Roma family who lived in an apartment where the man began his attack with a machine gun and two pistols, said Interior Minister Daniel Lipsic. Roma, also known as Gypsies, often face discrimination in eastern Europe, but Lipsic and police chief Jaroslav Spisiak said the unidentified gunman's motive was not known.

Another man shot and killed outside the building was "probably" also a member of the same family, Lipsic said.

"So far we don't know the motive ... so I will not speculate whether it did or did not have (a) racial motive," he told reporters. "I doubt it, but of course the investigation is ongoing."

The shooting took place at midmorning in the rundown Devinska Nova Ves neighborhood on the outskirts of the Slovak capital, surrounded by fields and industrial areas.

The five Roma who died in the apartment — four women and a man — lived in a brown high-rise building, Spisiak said.

Police rushed to the scene as the attacker, about 50 years old, was leaving the building, and he fired indiscriminately at people in the area, wounding 15, including a policeman and a 3-year-old boy who was shot in the ear, Lipsic said.

The seventh fatality was a woman who was shot in the area as she walked to the balcony of her apartment when she heard the gunfire, Lipsic said.

Afterward, SME, a daily newspaper in Slovakia, released a photograph of a person it identified as the gunman. It shows a middle-aged man standing on a sidewalk and pointing a machine gun at an unidentified target overhead. The man appears to have planned the shootout because he is wearing device over his ears to protect his hearing.

The Slovak news agency TASR, referencing a police statement, identified the gunman late Monday as a 48-year-old local who was in legal possession of the weapons he used for the killing spree. Without citing a source, TASR also reported that the man died from a gunshot to his head.

Daniel Zitnan of Bratislava's Children's Hospital said the 3-year-old boy who was shot while riding in a car was only slightly hurt and released after treatment.

Renata Vandriakova — who heads the emergency room at one of Bratislava's hospitals and oversees the city's response to health emergencies — said one of the 15 wounded had to be operated on and was in critical condition.

Emergency crews blocked off the scene of the attack, which is close to a kindergarten and a supermarket.

Hours after the attack, stunned residents milled about in disbelief.

"I'm shocked," said 20-year-old Andre Smahovski, a student whose friend was injured in the shooting. "Normally this doesn't happen here."

Christian Padour, 40, described how his sister-in-law was at a doctor's office when a woman who had been shot by the gunman entered — to the horror of those present.

"I feel safe here, but now it looks like the Wild West," Padour said.