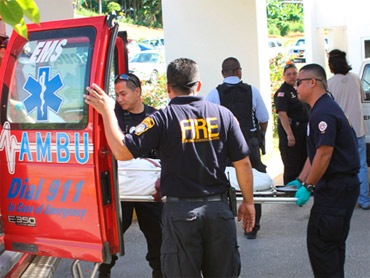 A gunman went on a rampage on the Pacific resort island of Saipan Friday, first at a shooting range and then at a World War II historical site, killing four people and wounding six others before fatally shooting himself, officials said.

The violence claimed the lives of two men, a 4-year-old boy and a 2-year-old girl, all residents of the U.S. commonwealth, Public Safety spokesman Jason Tarkong said. Five South Korean tourists and a 4-year-old local girl were wounded.

Police said the attacker first took aim inside the shooting range in the community of Kannat Tabla, killing two men in their early 20s and the two children. A 4-year-old girl was critically injured with a gunshot wound to the chest.

About 11:30 a.m., shortly after the first attack, the suspect began firing a rifle from a white van at a group of South Koreans visiting a World War II historical spot in nearby Marpi. The South Koreans were wounded. Police said they do not believe the shooter was specifically targeting tourists in what Tarkong termed a "random drive-by shooting."

Authorities said the suspected shooter was a contract worker in his 30s or 40s from Asia, but did not provide his name or home country. However, several residents said the man was known as "Mr. Lee" and they believe he was from China.

The Pacific News Center identified the gunman as Lee Zhong Ren, an employee at the shooting range. The news station also reported that Lee left behind a suicide note that spoke of a business deal gone bad.

Police would not immediately confirm the report.
572400
Saipan is the main island of the U.S. Commonwealth of the Northern Mariana Islands, which has about 60,000 residents and is located about 3,800 miles southwest of Hawaii. Saipan is a popular tourist destination among South Koreans, with more than 111,000 South Koreans visiting the island in 2008, according to the Marianas Visitors Authority.

Korea is the second largest market for the commonwealth, behind Japan.

The shootings created confusion and fear as authorities locked down schools and police spread out investigating the crime scenes.

The suspect was last spotted driving toward Banzai Cliff, the site where an untold number of Japanese jumped to their deaths in 1944 after the Battle of Saipan. When police officers arrived in the area, witnesses reported a man was shooting a rifle in the area.

Police discovered the van and recovered three rifles inside the vehicle.

Officials said the gunman's body was found along the edge off the cliff line near the vehicle with a .22-caliber rifle strapped around his shoulder. He was wearing jeans, a dark T-shirt and a denim jacket.

Police reaching the scene at the shooting range discovered the four bodies next to each other, and the young girl who was the only survivor of the first attack.

The South Korean tourists were sightseeing in an area known as the Last Command Post, a World War II attraction featuring remnants of American tanks. There is also a memorial in the area dedicated to Koreans who fought in the war.

Among the South Koreans, a 39-year-old man was critically injured with a wound to his back. Two other men, both 38, were shot multiple times and in stable condition. One man was shot in the chest and both arms while the other was shot in the legs and buttock. The wounded Korean children were treated and released from the Commonwealth Health Center, authorities said.

Lt. Governor Eloy Inos called it a sad day for the commonwealth, which is heavily dependent on tourism.

"This is an unfortunate but isolated incident," he said. "It happened for reasons unbeknownst to us but we can handle this type of situation. We want to want to assure the community and our tourists that the commonwealth is still a good place to visit."