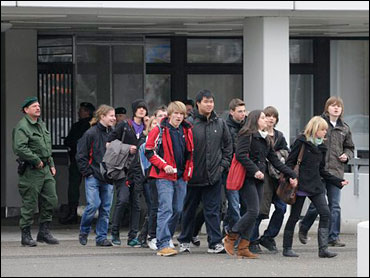 A 17-year-old gunman dressed in black opened fire inside his former high school in southwestern Germany on Wednesday killing 15 people before he turned the gun on himself, authorities said.

The gunman entered the school in Winnenden at 9:33 a.m. after classes had begun and opened fire, shooting at random, police said. He killed nine students, three teachers and a passer-by outside the building, officials said. Two other people were killed later.

"He went into the school with a weapon and carried out a bloodbath," said regional police chief Erwin Hetger. "I've never seen anything like this in my life."

His name was Tim Kretschmer, a former student at Albertville, but authorities have no idea why he did it, reports CBS News correspondent Richard Roth.

"Some students died with pens still in their hands," said Heribert Rech, the region's interior minister. "Most were shot in the head. Most of the victims were women and girls."

School officials and former classmates called Kretschmer absolutely average: a mediocre student who was training to become a salesman. His deadly rampage rang alarms at every school in town.

"We had to stay in classrooms and lock our doors and then the police came," said student Simeon Konjack.

Now in Germany they're wondering if some other alarms went unnoticed, Roth reports. A grudge, perhaps, that Kretschmer held in silence.

His high caliber pistol, they know, came from home - where his father, a member of a shooting club, kept 15 guns, but kept only 14 of them locked up.

Triggering a land and air manhunt, the gunman hijacked a car and forced the driver to head south, sitting in the back seat, according to Stuttgart prosecutors, who are leading the investigation.

When the driver swerved off the road to avoid a police checkpoint, he managed to escape and the suspect, identified as Kretschmer ran into an industrial area in the town of Wendlingen with police in pursuit.

There he entered an auto dealership, shooting and killing a salesman and a customer, and then went back outside, prosecutors said.

The victims were primarily female. In the school, eight girls and a boy were shot dead, along with three teachers.

(CBS)
In their hunt for Kretschmer, police searched his parents' home in a nearby town. It was there that authorities discovered on of the suspect's father's gun missing.

The death toll was close to that of Germany's worst school shooting.

In the 2002, 19-year-old Robert Steinhaeuser shot and killed 12 teachers, a secretary, two students and a police officer before turning his gun on himself in the Gutenberg high school in Erfurt, in eastern Germany.

Steinhaeuser, who had been expelled for forging a doctor's note, was a gun club member licensed to own weapons. The attack led Germany to raise the age for owning recreational firearms from 18 to 21.

"It is hard to put into words what happened today, but our sadness and sympathy goes out to the victims' families," Merkel said at a news conference.

The European Parliament, meeting in Strasbourg, France, stood in silence for a minute, to honor the victims.

"It is our task as responsible politicians in the European Union and, indeed, all the member states to do our utmost that such deeds can be prevented," said EU assembly president Hans-Gert Pottering, a German.