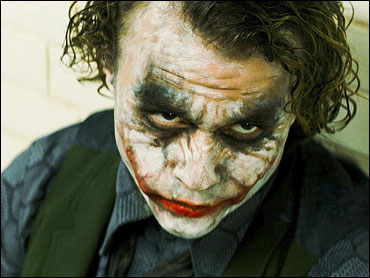 A soldier dressed and wearing face-paint like Batman villain The Joker was shot and killed by police in the Shenandoah National Park after he pointed a loaded shotgun at them after a chase, an FBI affidavit says.

Army Spc. Christopher Lanum, a suspect in the stabbing of a fellow soldier at Fort Eustis, was killed hours after the attack when officers attempted to stop the minivan he was driving, according to court documents filed Wednesday that first disclosed the weekend shooting.

Lanum's girlfriend Patsy Ann Marie Montowski, a passenger in the van, was hit by gunfire and treated at a hospital. She was arrested Wednesday evening and charged with being accessory after the fact to assault, authorities said.

A lawyer for Montowski was not listed in court documents.

According to the FBI affidavit filed in federal court in Montowski's case, Lanum was dressed in The Joker outfit at the time of an argument early Sunday with his Fort Eustis suite mate, Spc. Mitchell Stone. Montowski told the FBI that Lanum idolized the character.

Stone told emergency workers that Lanum stabbed him and used a stun gun on him, authorities said, adding he was taken to a hospital for serious injuries and later released.

Stone told emergency workers that Lanum stabbed him and used a stun gun on him, the affidavit said. Stone was taken to a hospital for serious injuries and later released.

Lanum and Montowski fled in her van, which a park ranger spotted about 200 miles northwest of the base, according to authorities. The ranger called for help, and Lanum led police on a slow-speed chase before running over a spike strip laid down by police and crashing, they added.

The FBI said Montowski told them that Lanum handed her the shotgun and asked her to kill him, but she refused. The affidavit says Lanum pointed the gun at police, his finger on the trigger, and refused commands to drop the weapon. A trooper fired through the driver's side window, Lanum's shotgun discharged, and police fired several times.

The trooper and park rangers involved in the shooting were placed on administrative leave with pay pending the outcome of internal investigations, according to a joint state police, FBI and National Park Service release.