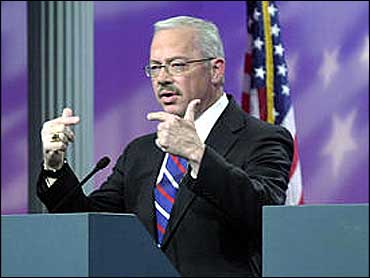 An antique .38-caliber pistol accidentally discharged as it was being handled by U.S. Rep. Bob Barr during a reception in his honor. The bullet hit a glass door, and no one was hurt.

Georgia lobbyist Bruce Widener said Tuesday that he had removed the magazine from his 1908 Colt but did not clear the chamber before handing the weapon to Barr, a board member of the National Rifle Association.

Widener said "one of us hit the trigger" just as he gave Barr the gun during Friday's reception at Widener's home.

"Nobody was in any danger. We were handling it safely, except that it was loaded," said Widener, an independent lobbyist. "I am thankful Bob was careful to always keep the weapon pointed in a safe direction."

Through a spokesman, Barr said: "This accident only underscores the importance of proven gun safety measures, especially when owning and handling antique firearms."

Widener had opened his gun cabinet to Barr and others at the reception and acknowledged that it is unsafe to store a loaded weapon there.

Barr is locked in a tight Republican primary with fellow incumbent John Linder in Georgia's redrawn 7th Congressional District. Barr has tied his NRA endorsement closely to his campaign.

Of the gun accident, Linder said: "The first time you hear this, it's funny. But it's not funny. The guy's a loose cannon. I've been around guns a lot. I just don't pick up other people's guns."