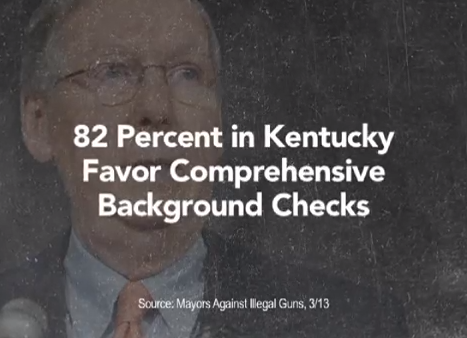 As the Senate begins debate on a controversial package of new gun laws, one Democratic political organization is out with a new television ad targeting Sen. Minority Leader Mitch McConnell, R-Ky., for his pro-gun positions, likening his beliefs with an al Qaeda recruitment video.

The group, Americans United for Change, is airing a 30-second spot on broadcast television in Lexington, Ky., starting today. The ad buy, which clocks in at a modest $5,000, will air on local news Friday evening as well as on a slew of political talk shows this weekend, including CBS' "Face the Nation" and "60 Minutes," as well as "Meet the Press" and "This Week."

"Most Kentucky residents want background checks for gun sales, but Republican leader Mitch McConnell, is against them," says a narrator in the ad. "So who does agree with Mitch?"

The ad then features a 2011 al Qaeda recruitment video starring Adam Gadahn, an American-born spokesman for the terrorist organization.

"You can go down to a gun show at the local convention center and come away with a fully automatic assault rifle, without a background check, and most likely without having to show an identification card," Gadahn says in the video. "So what are you waiting for?"

The ad then lists a Kentucky phone number for McConnell, and urges them to "ask him why he's in such bad company."