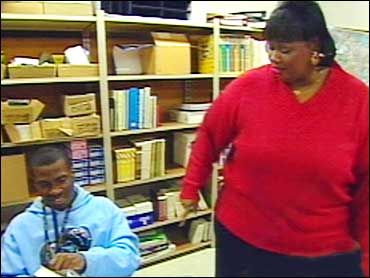 Patriotism can take on many forms. For some, it's waving the Stars and Stripes. For others, it's a quiet moment during the Pledge of Allegiance.

And for a special group of young people in South Holland, Ill., it's a simple note of thanks, reports The Early Show correspondent Debbye Turner.

With a strip of tape, a rose and a piece of bubble gum, high school students in this Chicago suburb are offering simple gestures of thanks to the troops serving in the Middle East.

Funded in part by the U.S. Labor Department's Workplace Investment Act, "Project Gum and Roses" allows special education students to learn workplace skills by assembling care packets that are sent to schools across the country, where students add a personal note and send it off to a serviceman or woman.

McDonald has cerebral palsy, and he is one of nearly 100 special education students participating in a program. It made him feel appreciated and happy, he said. So did his friend Mike Ayon.

"I know that I'm helping a friend, and yet, doing a good deed for the troops," says McDonald. "And I appreciate it because knowing that my bother is in the Army … I know that he's in good hands as well."

The program is not just about patriotism. It is designed to help young people with autism, severe learning disabilities and cerebral palsy build the job and life skills necessary to join America's workforce.

"I've learned a lot of teamwork and that cooperation does a lot of work," says Matt Knapp, another student of the program. "If you work together, you become one."

"Gum and Roses" is the brainchild of Dr. Larry Baran.

"Kids get work, like any normal human being," says Dr. Baran, a former special education teacher. "They're real Americans who want to learn work. And when you aren't working, it's devastating. I have been on disability. It is horrible. Because you want something to do, to have meaning in your live. They are getting meaning and have dignity through this program."

Phyllis Brown has partnered with Dr. Baran in the "Gum and Roses" project and shares his passion and enthusiasm about educating disabled young people.

"I think it builds their self esteem, their dignity," says Brown, the program administrator. "Many times these kids have been labeled. They're looked upon as the less-than. And for them to impact the world like they are right now, boy, I'm telling you."

The program had received support from the secretary of defense and the chairman of the Joint Chiefs of Staff.

The gum eventually reaches the service men and women, who know that people back home - people they have never met - are thinking about them.