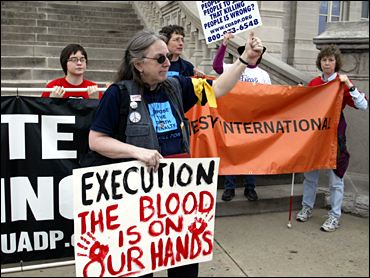 A decorated Gulf War veteran who claimed his exposure to Iraqi nerve gas caused him to rape and kill a female soldier was executed by injection Tuesday at a federal prison.

Louis Jones Jr., 53, died by injection at the U.S. Penitentiary near Terre Haute after President Bush and the U.S. Supreme Court refused his two final requests that they intervene.

Jones was the third person — after Oklahoma City bomber Timothy McVeigh and drug kingpin Juan Garza — put to death by the federal government since it resumed executions in 2001 after a 38-year suspension.

Jones, who had no prior criminal record, admitted kidnapping 19-year-old Pvt. Tracie Joy McBride from Goodfellow Air Force Base in San Angelo, Texas, raping her and beating her to death with a tire iron. His attorneys said exposure to the gas caused severe brain damage that led him to kill.

As the execution time neared, about a dozen death penalty opponents held a candlelight vigil near the prison. No death penalty supporters were present.

A sign leaning against a fence in front of the group said, "The tragic irony: As we rush recklessly to war with Iraq we are killing a veteran of the first Gulf War."

The White House and the high court refused Monday to block the execution after reviewing Jones' nerve gas claims. White House officials declined to explain the president's decision, and the court did not comment.

Attorney Timothy Floyd said his client had been hopeful as he awaited word on whether President Bush would consider his request to commute his death sentence to life in prison.

"He was really remarkably strong and I think at peace with whatever happens. I attribute that to his deep faith — I think that's sustained him through this," Floyd said before Mr. Bush's decision was announced.

Federal prosecutors and McBride's family in Centerville, Minn., opposed Jones' clemency request, pointing to evidence of his aggressive behavior before the Gulf War, including four incidents in which he beat up co-workers or fellow soldiers.

"There were several thousand troops in the same war, and I have yet to hear of any one of them coming home, kidnapping, raping and violently murdering a young lady, said her father, Jim McBride.

Following his Gulf War service, Jones was promoted to master sergeant and honored with a Meritorious Service Award. Jones killed McBride two years after his honorable discharge from the Army.