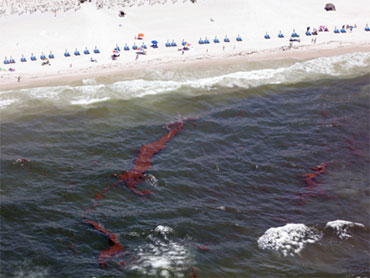 A containment cap that sucked some of the oil from a blown-out well in the Gulf of Mexico offered a small sign of progress for a region that has seen its wildlife coated in a lethal oil muck, its fishermen idled and its beaches tarnished by the nation's worst oil spill.

BP chief executive Tony Hayward told the BBC on Sunday that over the last 24 hours, the cap placed on the gusher near the sea floor trapped about 420,000 gallons of oil. It's not clear how much is still escaping - an estimated 500,000 to 1 million gallons of crude is believed to be leaking daily.

Hayward said he believed the cap is likely to capture "the majority, probably the vast majority" of the oil gushing from the well.

The next step is for engineers at BP PLC to attempt to close vents on the cap that were deliberately allowing streams of oil to escape the system so water cannot get inside. When water and gas combined in an earlier containment box, it formed a frozen slush that foiled the system.

Allen, who said the goal is to gradually increase the amount of the oil being captured, compared the process to stopping the flow of water from a garden hose with a finger: "You don't want to put your finger down too quickly, or let it off too quickly."

While BP plans to eventually use an additional set of hoses and pipes to increase the amount of oil being trapped, the ultimate solution remains a relief well that should be finished by August.

The urgency of that task was apparent along the Gulf Coast nearly seven weeks after a BP rig exploded and the wellhead a mile below the surface began belching millions of gallon of oil.

Pelicans struggle to free themselves from oil, thick as tar, that gathers in hip-deep pools, while others stretch out useless wings, feathers dripping with crude. Dead birds and dolphins wash ashore, coated in the sludge. Seashells are stained crimson.

"These waters are my backyard, my life," said boat captain Dave Marino, a firefighter and fishing guide from Myrtle Grove. "I don't want to say heartbreaking, because that's been said. It's a nightmare. It looks like it's going to be wave after wave of it and nobody can stop it."

The oil has steadily spread east, washing up in greater quantities in recent days.

Government officials estimate that roughly 22 million to 48 million gallons have leaked into the Gulf since the April 20 explosion that killed 11 workers.

In Gulf Shores, Ala., boardwalks leading to hotels were tattooed with oil from beachgoers' feet. A slick hundreds of yards long washed ashore at a state park, coating the white sand with a thick, red stew. Cleanup workers rushed to contain it in bags, but more washed in before they could remove the first wave of debris.

"This makes me sick," said Rebecca Thomasson of Knoxville, Tenn., her legs and feet smeared with brown streaks of crude. "We were over in Florida earlier and it was bad there, but it was nothing like this."

Alabama Gov. Bob Riley and Allen met for more than an hour Saturday in Mobile, Ala., agreeing to a new plan that would significantly increase protection on the state's coast with larger booms, beachfront barriers, skimmers and a new system to protect Perdido Bay near the Florida line.

At Pensacola Beach, Erin Tamber, who moved to the area from New Orleans after surviving Hurricane Katrina in New Orleans, inspected a beach stained orange by the retreating tide.

"I feel like I've gone from owning a piece of paradise to owning a toxic waste dump," she said.

Back in Louisiana, along the beach at Queen Bess Island, oil pooled several feet deep, trapping birds against containment boom. The futility of their struggle was confirmed when Joe Sartore, a National Geographic photographer, sank thigh deep in oil on nearby East Grand Terre Island and had to be pulled from the tar.

With no oil response workers on Queen Bess, Plaquemines Parish coastal zone management director P.J. Hahn decided he could wait no longer, pulling an exhausted brown pelican from the oil, slime dripping from its wings.

"We're in the sixth week, you'd think there would be a flotilla of people out here," Hahn said. "As you can see, we're so far behind the curve in this thing."

After six weeks with one to four birds a day coming into Louisiana's rescue center for oiled birds at Fort Jackson, 53 arrived Thursday and another 13 Friday morning, with more on the way. Federal authorities say 792 dead birds, sea turtles, dolphins and other wildlife have been collected from the Gulf of Mexico and its coastline.

Yet scientists say the wildlife death toll remains relatively modest, well below the tens of thousands of birds, otters and other creatures killed after the Exxon Valdez ran aground in Alaska's Prince William Sound. The numbers have stayed comparatively low because the Deepwater Horizon rig was 50 miles off the coast and most of the oil has stayed in the open sea. The Valdez ran aground on a reef close to land, in a more enclosed setting.

Experts say the Gulf's marshes, beaches and coastal waters, which nurture a dazzling array of life, could be transformed into killing fields, though the die-off could take months or years and unfold largely out of sight. The damage could be even greater beneath the water's surface, where oil and dispersants could devastate zooplankton and tiny invertebrates at the base of the food chain.

"People naturally tend to focus on things that are most conspicuous, like oiled birds, but in my opinion the impacts on fisheries will be much more severe," said Rich Ambrose, director of the environmental science and engineering at program at UCLA.

The Gulf is also home to dolphins and species including the endangered sperm whale. A government report found that dolphins with prolonged exposure to oil in the 1990s experienced skin injuries and burns, reduced neurological functions and lower hemoglobin levels in their blood. It concluded that the effects probably wouldn't be lethal because many creatures would avoid the oil. Yet dolphins in the Gulf have been spotted swimming through plumes of crude.

The prospect left fishing guide Marino shaking his head, as he watched the oil washing into a marsh and over the body of a dead pelican. Species like shrimp and crab flourish here, finding protection in the grasses. Fish, birds and other creatures feed here.

"It's going to break that cycle of life," Marino said. "It's like pouring gas in your aquarium. What do you think that's going to do?"