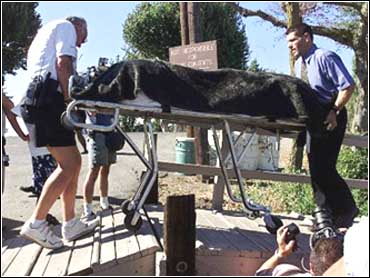 The daughter of blues guitarist Elvin Bishop may have been involved in a botched extortion plot that led to her savage death and the slayings of four others, including her mother, police say.

Two brothers and their female roommate have been arrested on drug possession and burglary charges, and police consider them "potential suspects" in the slayings.

Before her death, 22-year-old Selina Bishop may have joined the suspects in a plot to extort $100,000 from two other victims, an elderly couple, Concord police Lt. Paul Crain said.

"Why and when Selina became a victim is unclear," said Sgt. Douglas Pittman of the Marin County Sheriff's office.

The Sacramento County coroner on Friday announced that the three dismembered bodies found in gym bags in a river had been identified as Bishop and Ivan and Annette Stineman, an elderly couple from Concord.

Police also recovered what may be Bishop's diary and are trying to determine whether it is authentic, Crain said Friday.

Glenn Helzer, 30, who had dated Bishop, his brother Justin Helzer, 28, and Dawn Godman, 26, were arrested Monday in their Concord home and are being held on drug possession and burglary charges. No one has been charged in the slayings.

"I know my two sons are totally innocent. They're innocent," their mother, Carma Helzer, said Friday.

Police say the crimes began around July 30, when the Stinemans were last seen.

Bishop — or someone posing as her — called a bank before two of the Stinemans' checks, written to Bishop's name, were cashed last week, Crain said.

It's unclear who fell victim next. One police theory is that Bishop fled in fear and was killed to cover up the Stineman's deaths.

The morning after Bishop was last seen with Glenn Helzer in a Berkeley pub, her mother, Jennifer Villarin, 45, and friend Joseph Gamble, 54, were shot dead in Bishop's apartment.