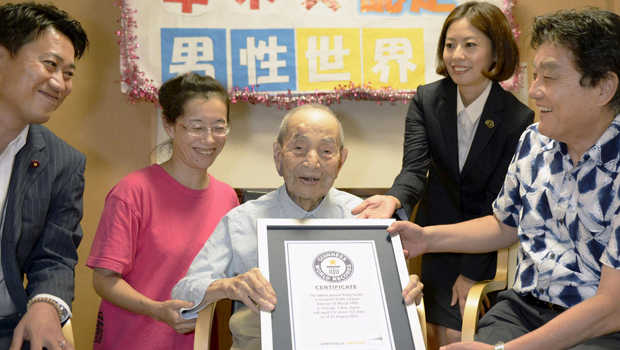 NAGOYA, Japan -- The secret to a long, happy life? Yasutaro Koide, a 112-year-old living in the central Japanese city of Nagoya who was officially recognized by Guinness World Records on Friday as the world's oldest man, says to "not overdo."

Koide was born on March 13, 1903, and worked as a tailor. He became the oldest man with the death of Sakari Momoi of Tokyo in July at age 112.

Three of his seven children, two of his nine grandchildren and one great grandchild attended a ceremony at a nursing home where he was given a plaque and a green vase.

Koike was beaming but teary-eyed as those attending applauded.

"The best thing is to not overdo," Koide said. He also recommended not smoking or drinking and said his favorite food is bread.

Koike also recommends "enjoying everything," according to local reports that say he can read the newspaper without glasses.

The newspaper Chunichi Shimbun quoted a granddaughter, Aya Kikuchi, as saying her grandfather once tended to be very strict about manners. "He was very stubborn, but he got nicer with age," she said. "His lifestyle is one that avoids stress."

One of the world's fastest-aging countries, Japan has about 54,000 centenarians. So many, in fact, the government is reportedly considering scrapping or scaling back a 52-year-old program that presents each person reaching the century mark with an ornate sake dish and letter of congratulations from the prime minister.

The world's oldest person is Susannah Mushatt Jones of Brooklyn, New York, who celebrated her 116th birthday on Monday.