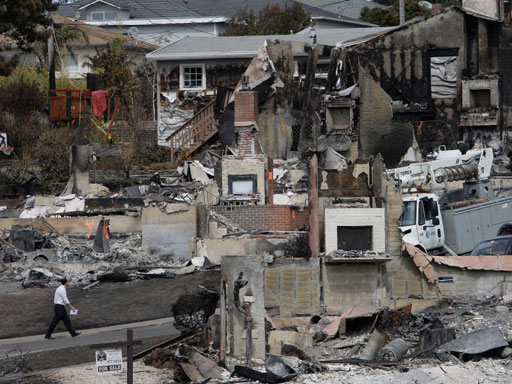 SAN FRANCISCO -- A federal jury found California's largest utility guilty on Tuesday of misleading investigators about how it was identifying high-risk pipelines after a deadly pipeline explosion in the San Francisco Bay Area.

The jury found PG&E not guilty of six of 11 remaining counts that alleged pipeline violations.

The blast of a Pacific Gas & Electric Co. natural gas pipeline six years ago sent a giant plume of fire into the air, killing eight people and destroying 38 homes in the city of San Bruno.

During the investigation, prosecutors say, the San Francisco-based utility misled federal officials about the standard it was using to identify high-risk pipelines.

PG&E pleaded not guilty and said its employees did the best they could with ambiguous regulations they struggled to understand.

The stakes in the case dropped dramatically, however, when prosecutors made the surprising decision several days into jury deliberations not to pursue a potential $562 million fine if PG&E was found guilty of any of the counts.

The decision, which was approved by a judge, reduced the company's maximum liability to $6 million, prompting criticism that prosecutors were not holding PG&E accountable.

According to prosecutors, the standard PG&E used to identify high-risk pipelines violated safety regulations and led to a failure to classify the San Bruno pipeline and others as high risk and properly assess them.

The company also did not subject the pipelines to appropriate testing, choosing a cheaper method to save money, prosecutors told jurors.

"The motive was profits over safety," Assistant U.S. Attorney Jeffrey Schenk said during his closing argument in the more than monthlong trial.

PG&E engineers did not think the pipelines posed a safety risk, and the company did not intend to mislead investigators, PG&E attorney Steven Bauer said during the trial.

The utility inadvertently sent officials a draft policy about its standard for identifying high risk pipes, not one the company was actually following, he said.

"Nobody at PG&E is a criminal," he said during his closing argument. He accused prosecutors of engaging in an "elaborate second-guessing exercise."

Investigators have blamed the blast in part on poor PG&E record-keeping that was based on incomplete and inaccurate pipeline information.