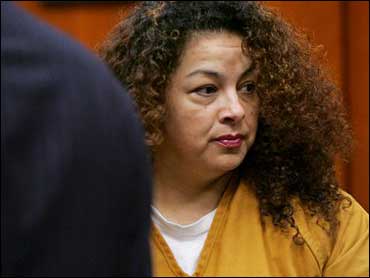 A Nevada couple pleaded guilty Friday to all charges related to planting a human finger in a bowl of Wendy's chili in a scheme to extort money from the fast food restaurant chain.

Anna Ayala, 39, and Jaime Placencia, 43, pleaded guilty to conspiring to file a false claim and attempted grand theft in a scheme that the Dublin, Ohio-based Wendy's International Inc. claimed cost it $2.5 million in lost sales because of bad publicity.

"There are a lot of people that work for Wendy's that were harmed, she always felt a lot of remorse about that," he said.

Ayala claimed to have found the fingertip March 22 while eating chili with her family at a Wendy's in San Jose. Authorities said they believed it was a hoax, but the story of the tasteless finger food quickly circled the globe and became fodder for late-night comedy.

A search for the finger's owner eventually led to one of Placencia's co-workers, who lost it in an industrial accident in Las Vegas, police said.

Ayala was arrested in April in her suburban Las Vegas home and accused of trying to shake down Wendy's by filing a claim against the restaurant chain.

She later withdrew the claim as scrutiny of her find grew. Investigators found that she had filed numerous legal claims against businesses in her name or for her children.

Wendy's said no employees at the San Jose restaurant were missing fingers, and no suppliers of chili ingredients had reported any finger injuries. There was no evidence the finger had been cooked, authorities determined.

The franchise where the finger claim was made saw an immediate 60 percent to 70 percent drop in business, said Stephen Jay, marketing director at JEM Management, which owns the restaurant. Dozens of employees at the company's Northern California franchises were laid off.

Ayala faces up to nearly 10 years in state prison when sentenced Nov. 2. Her husband faces up to 13 years behind bars.