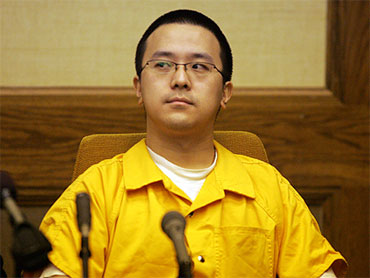 A former Virginia Tech student accused of at a campus eatery pleaded guilty to murder Monday as prosecutors described the killer as an obsessed, jilted lover.

Haiyang Zhu (hy-yuhng-joo) had fallen in love with Xin Yang (shin yuhng) but she rejected him, saying she had a boyfriend she planned to marry, prosecutors said in revealing a motive for the first time.

Zhu faces up to life in prison. He did not say why he killed the woman during the plea hearing.

Prosecutor Brad Finch said on the morning of Jan. 21, Zhu bought the 8-inch butcher knife used in the murder, two other knives and a claw hammer. He also called the 22-year-old a dozen times after buying the weapons.

Finch also cited a letter Zhu wrote while in jail, which said Yang's rejection "forced him to kill her" because "he loved her too much."

"Xin broke his heart on the morning of January 20th when she told him that she had a boyfriend and that they planned to get married," the letter said, according to Finch.

Before the killing, Zhu penned what Finch termed a love letter that was found in her dorm room after her death. The letter was written shortly after Zhu first met her and indicated he had "fallen deeply in love."

"She makes him happy and fulfilled, that she is beautiful and that he will treasure her forever," Finch said. "The defendant asked Xin to be his girlfriend."

Finch also described the attack in detail, noting that Yang suffered numerous defensive wounds to her hands and arms as she tried to fend off Zhu. She eventually fell and he severed her head. He was holding it when police arrived.

About seven other people who were in the shop at the time told police the two hadn't been arguing before the attack.

The killing stunned a campus that still had vivid memories of the mass slayings in April 2007, when a student gunman shot 32 people and then took his own life. The stabbing was the first slaying on campus since then.

It appeared Yang, who was from Beijing, had met Zhu of Ningbo, China, only recently, Kim Beisecker, the director of Cranwell International Center, has said. Zhu, a doctoral student in agricultural and applied economics, had been assisting her in adjusting to life at Tech, something the 500 Chinese students often do for new members in their community.