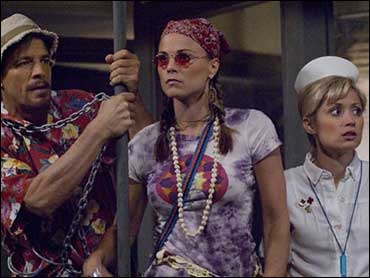 The daytime drama "Guiding Light," which has been entertaining audiences on radio and television for almost 70 years, hit another milestone Thursday with the airing of its 15,000th television episode.

In the episode, Reva (Emmy Award winner Kim Zimmer) goes to the Springfield lighthouse in the hopes of gaining some perspective on the life that is rapidly slipping away from her. She wishes she could change everything — no cancer, no broken marriage, no pain or regret.

But when she suffers a dangerous fall, she awakens to a changed world — a world totally unlike the one she came from.

Created by soap opera pioneer Irna Phillips, "The Guiding Light," as it was originally known, debuted on the radio Jan. 25, 1937. Broadcast live from Chicago, the 15-minute daily show centered on the Rev. Dr. John Ruthledge and the people he counseled in the town of Five Points, Ill.

He kept a lamp lit in his study as a "guiding light," indicating he was always available to those in need.

"The Guiding Light" moved to Los Angeles in 1947 and the story's location was changed to Selby Flats, Calif. Some of the storylines were quite daring for its day, including one about the character Rose Kransky who became radio's first unwed mother.

In 1949, the show moved to New York where it is still taped for television at the CBS Broadcast Center in Manhattan.

The show premiered on TV on June 30, 1952 and continued on radio for a few more years. During that time, the cast had to perform the show live for TV in the morning and then do it all over again for live radio in the afternoon.

In the 1950s and '60s, the show revolved around the Bauers, a lower-middle class German immigrant family headed by the wise Friedrich "Papa" Bauer. His three children, Bill, Meta, and Trudy, provided plenty of drama, and storylines included Bill's battle with alcohol, sibling rivalry between Trudy and Meta, and Meta's challenging relationship with her step-daughter Kathy.

Bill's wife, Bert, was played by Charita Bauer from 1950 until her death in 1985. Bert became the matriarch on the show and one of the most beloved characters in soap opera history.

3In 1962, Bert was diagnosed with uterine cancer in a groundbreaking storyline that raised awareness about the importance of regular pap smear screenings. Since then, the show has tackled substance abuse, domestic violence, birth control, adoption and many other social issue-driven themes.

In 1967, the show had its first broadcast in color; the following year, the show's length was expanded to 30 minutes.

During the 1960s, "The Guiding Light" became one of the first soaps to feature African-American actors with James Earl Jones, Billy Dee Williams, Ruby Dee and Cicely Tyson all landing roles on the show.

The show's name was changed to "Guiding Light" in 1975, and new writers were brought in to update the show's storylines. A love triangle between the character Leslie Jackson and Bert Bauer's sons Mike and Ed was introduced, along with the arrival of soap vixen Rita Stapleton. The show expanded to an hour-long format in 1977.

In 1983, Kim Zimmer created the role of Reva Shayne Lewis Cooper Spaulding Lewis Lewis, one of the show's most popular characters. She stayed until 1990, when her character drove off a bridge after a bout of post-partum depression.

In true soap fashion, the presumed-dead Reva resurfaced in 1995 when Zimmer returned to the show. Reva was alive and well — except for a little amnesia — and living as an Amish woman.

Over the years, Reva has hosted a talk show, been a psychic, was a princess of a small island, traveled back to Victorian times, and baptized herself "The Slut of Springfield" after stripping down to a teddy and jumping into the country club fountain.

2Reva walked down the aisle several times, including three times with the handsome Josh Lewis, played by actor Robert Newman. The couple wed most recently in 2002 and are still together — for now.

By the 1990s there were several families central to the plot including the Bauers, Spauldings, Lewises and the Coopers.

The character of Meta Bauer was brought back in 1997, played by legendary soap actress Mary Stuart. She stayed on "Guiding Light" until her death in 2002.