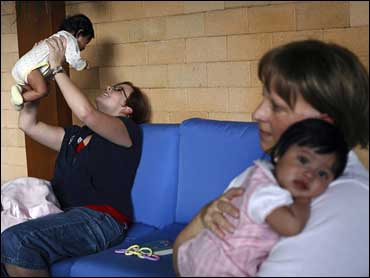 A law that tightens adoptions was passed by Guatemala's Congress on Tuesday, but it allowed pending adoptions, mostly to U.S. couples, to go through without meeting the stricter requirements.

The new law will help Guatemala comply with the Hague Convention, an international agreement to protect adopted children from human trafficking. The Central American country sent 4,135 children to the U.S. last year, making it the largest source of babies for American families after China.

Many adoptive parents, some of whom had invested their life savings to bring home a Guatemalan baby, feared the changes would leave in limbo about 3,700 children already matched with adoptive parents.

But the new law stipulates that pending adoptions need not meet the new requirements.

President Oscar Berger is expected to sign the law, which will take effect next year. It is aimed at cleaning up an adoption process that critics claim allows birth mothers to sell their babies for profit.

"Starting Dec. 31, the business of adoptions is over," said lawmaker Rolando Morales, one of the law's biggest supporters.

Currently, the adoption process has been handled exclusively by notaries who work with birth mothers, determine if babies were surrendered willingly, hire foster mothers and handle all the paperwork.

These notaries charge an average of $30,000 for children delivered in about nine months - record time for international adoptions. The process is so quick that one in every 100 Guatemalan children now grow up as an adopted American.