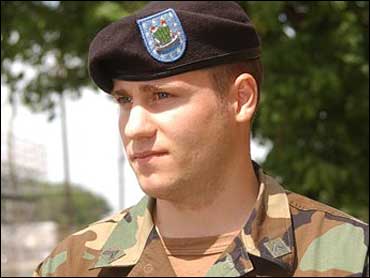 An Indiana national guardsman pleaded guilty Monday to negligent homicide in the shooting death of an Iraqi police officer, a crime he was accused of attempting to cover up by shooting himself in the stomach.

Cpl. Dustin Berg, 22, who had been charged with murder, testified that he felt he did not properly assess the threat that he faced and acted rashly.

"I shouldn't have automatically considered him a threat," Berg said. "I misread the situation."

Berg, of Ferdinand, Ind., had changed his story multiple times during the investigation, initially saying the Iraqi had pointed an AK-47 at him to prevent Berg from reporting insurgent activity. On Monday, however, Berg said that Iraqi police officers as a matter of habit carried their guns with the barrels pointed slightly upward.

It was the latest in at least a dozen court-martials of U.S. troops accused in the deaths of Iraqi civilians.

Berg was accused of killing the Iraqi police officer in November 2003, then shooting himself in the stomach to give the impression of a gunfight and block an investigation.

"I thought I was going to die," Berg testified during a May hearing. "I felt I had no choice but to fear for my life."

He later admitted that he shot himself with the Iraqi's weapon in an attempt to limit questions since there were no witnesses. Three other soldiers from his unit were under investigation at the time, and Berg said he was scared he would be, too.

The charges against Berg raised questions about whether a soldier's right to defend himself depends on the presence of a witness.

Most military personnel accused of murder argue self-defense because there are few other options available on the battlefield, said Gary Solis, a law professor at the U.S. Military Academy at West Point. Soldiers can claim they were acting in self-defense or that they were following orders, Solis said.

"To say that it happened in combat can be nothing more than a convenient cop-out — because there can be murder in combat," Solis said.

At least eight U.S. soldiers have been convicted or have pleaded guilty to charges stemming from the deaths of Iraqis.