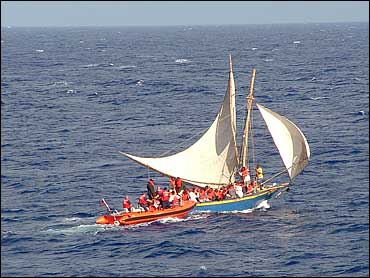 Thailand's navy abandoned hundreds of illegal migrants on a barge in the Indian Ocean where about 300 desperate people with little food and water later drowned, a refugees' advocacy group said.

Chris Lewa, coordinator of the Bangkok-based advocacy group Arakan Project, said Friday at least two survivors recounted their experience to her. She said they told her four illegal migrants were tied up and thrown into the ocean after the group refused to board the barge from a Thai navy vessel.

The United Nations refugee agency called for Thailand to explain what happened to the group of migrant workers from Myanmar and Bangladesh, at least 100 of whom were rescued in Indian waters in late December.

Washington-based Refugees International urged the Thai government to immediately halt its "policy of pushing refugees and migrants intercepted on boats back out to sea," which it says contravenes accepted standards of international law.

"The Thai government is taking highly vulnerable people and risking their lives," Refugees International advocate Sean Garcia said. "Pushing them back out to sea is not an effective deterrent - it just jeopardizes lives."

Thousands of Bangladeshi and Myanmar refugees leave aboard rickety boats each year in hope of finding work in neighboring countries. In the last three years, one of the most popular migration routes was by boat to Thailand and then overland to Malaysia, Lewa said. The trip costs several hundred dollars.

Survivors told Lewa they were rounded up and detained on a remote Thai island in the Andaman sea, where they were bound, beaten, and given little food.

Later, the migrants were herded onto a navy boat that was towing a barge, Lewa said. After several hours at sea, the Thai navy then ordered the migrants to board the barge.

"When the navy asked them to move to the barge, they refused. The navy tried to intimidate them by pointing guns at them. But they still refused to move," Lewa said, recounting her interviews with survivors.

"Then they tied the legs of some of them and threw four overboard. So when the rest of the people saw that, they moved onto the barge," she said.

Survivors said the Thai sailors left them with only two barrels of water and four bags of rice, according to Lewa.

The barge drifted for days before many of the desperate migrants jumped overboard, thinking they were close to shore. Only 10 of their bodies have been found by Indian authorities who began searching after finding the barge adrift.

"We requested the Thai government take all measures necessary to ensure the lives of the boat people are not put at risk and that they are treated humanely in accordance with international humanitarian standards," McKinsey said.