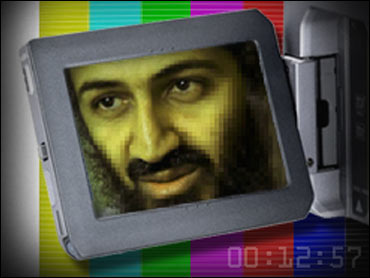 The 100-second clip showed bin Laden seated outside and wearing a camouflage jacket as he spoke to unseen supporters, extolling the merits of martyrdom.

If the film were just two months old it would be the first proof that bin Laden survived the U.S. onslaught on his militant al Qaeda network and Afghanistan's former Taliban rulers after the September 11 suicide attacks in the United States.

Neither bin Laden's comments nor the setting of the film -- under a tree outside a stone building, against a backdrop of hills -- appeared to shed light on when it was filmed.

Britain's Ministry of Defense said it had not seen the film and so could not comment on its contents.

President Bush's national security adviser, Condoleezza Rice, said: "I don't think we even know very much about the origins of this tape, so it's probably not wise to speculate."

The Ansaar news agency said Pakistani intelligence officers who supplied the video said it was shot in March.

"We can't verify or confirm it," said Ansaar journalist Imran Khan. "But bin Laden looks gaunt, thinner and whiter." He said he believed it was filmed in the southern Afghan border town of Spin Boldak.

He said the footage was part of a 40-minute film which the agency obtained in Pakistan four weeks ago. It was brought to Britain on an encrypted CD-ROM.

"Concerning the situation that we are in, we must praise Allah that he has allowed us to follow the path of (men who are among) the best of creation," bin Laden, Washington's chief suspect for the September 11 suicide plane attacks in the United States, said in the footage.

"We ask Allah for victory, and we ask Allah to grant us martyrdom," he said.

A separate clip in the 40-minute film featured an interview with bin Laden carried out by a reporter from the Arab satellite news network al-Jazeera, in which bin Laden warned that any country which sided with Israel or the United States would be an al Qaeda target.

Referring to comments by one of his aides specifically targeting Britain and the United States, bin Laden said: "This war is not confined to them."

Khan said the interview was filmed in November but had not been broadcast by al-Jazeera.