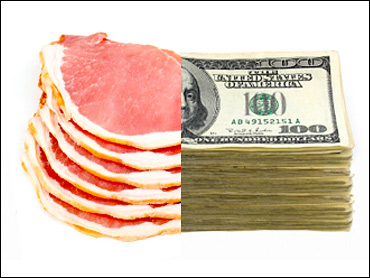 Consumers may not be in a spending mood, but members of Congress certainly are. And they're spending on pork.

A government watchdog group put out a report Tuesday that says what it calls wasteful spending is up $2 billion this year, as CBS News correspondent Sharyl Attkisson reports.

From almost $8 million to restore oyster habitats to perennial research on blueberries and honeybees, Congress' pork-barrel spending is out-of-the-park. (In fact, there's even $3.8 million dollars for Detroit's old Tiger Stadium.)

"You hear Washington officials say we all have to tighten our belts, we all have to sacrifice" said David Williams, vice president of Citizens Against Government Waste. "Well, yeah, but the politicians aren't sacrificing."

That means projects like turning the decaying Tiger Stadium into a park and business center. Money is given outside the regular budget, without the normal public review, often benefiting special interests or campaign contributors.

There's $1.9 million for a water taxi at the abandoned "Pleasure Beach" in Connecticut. Another $4.5 million benefits the timber industry, funding things like new uses for particleboard and plywood.

But Kansas may have the winner for the most self-absorbed earmark.

Top spenders overall are Democrat Neil Abercrombie of Hawaii in the House with $256 million in earmarks and Republican Thad Cochran of Mississippi in the Senate with $653 million.