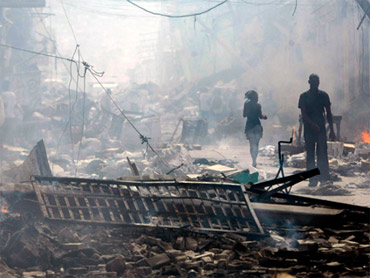 A report by three Inter-American Development Bank economists found last month's earthquake to be more devastating than the 2004 Indian Ocean tsunami was for Indonesia, and five times deadlier than the 1972 earthquake that leveled Nicaragua's capital.

"It is the most destructive (natural disaster) a country has ever experienced when measured in terms of the number of people killed as a share of the country's population," the report says — killing one in every 50 Haitians.

Haiti produced only $7 billion worth of goods and services in 2008, according to the World Bank.

"This is just an assessment of damage; it gives no indication of the amount of money to get the country back as if nothing had happened," Cavallo told The Associated Press by phone.

He said an ongoing assessment will be needed to determine the total amount Haiti needs to rebuild.

The authors used statistical models based on data compiled from about 2,000 natural disasters since 1970 — taking into account estimated death tolls, levels of economic development and other factors — and they caution the study is preliminary.

They came up with a wide range of potential estimates, including one as low as $4.1 billion.

But because there is so little precedent for a disaster this size — killing more than 200,000 people and striking directly at the heart of the country's political and economic center — Cavallo said they believe the final figure will be closer to their highest estimates.

That is devastating news for a country whose economy was faltering before the disaster and is the Western Hemisphere's smallest per capita.

The Dominican Republic, which shares the island of Hispaniola with Haiti and has a similarly sized population, had a $46 billion economy in 2008.

Disasters on the scale of Haiti's quake tend to induce long-term poverty that is difficult to reverse.

In many of the countries studied after their disasters, the authors found, personal wealth remained 30 percent lower 10 years after the events even with large amounts of international aid.