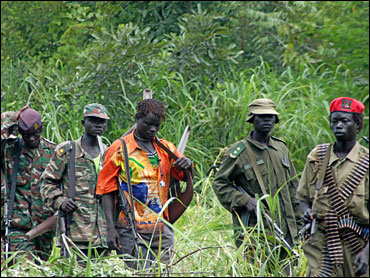 At least 321 civilians were killed in a previously unreported massacre in Congo in late 2009, while villagers that escaped their rebel captors were sent back with their lips and ears cut off as a warning to others of what would happen if they tried to talk, according to an investigation by a human rights group.

New York-based Human Rights Watch said in its report released Saturday that at least 250 more people were abducted by the Lord's Resistance Army rebels during the attack in the Makombo area of northeastern Congo, including no less than 80 children.

Human Rights Watch's senior Africa researcher, Anneke Van Woudenberg, called the massacre "one of the worst ever committed by the LRA in its bloody 23-year history."

Yet the killing spree, which occurred from Dec. 14 to 17 in at least 10 villages, had gone unreported for months.

The majority of those killed were men who were tied up, some bound to trees, before being hacked to death with machetes or having their skulls crushed with axes. A 3-year-old girl was burnt to death, according to the report.

The rebels then abducted many of the children and women, who were forced to march to a town over 60 miles away. Those that walked too slowly were executed and villagers told the rights group that they found bodies all along the trail from Makombo to the town of Tapili in northern Congo.

The Lord's Resistance Army is considered one of Africa's most brutal rebel armies, and its leaders are the subject of an International Criminal Court arrest warrant. Originally based in Uganda, the rebels were pushed into the area straddling the northern Congolese border with Central African Republic. The 2009 massacre is only the most recent of a pattern of atrocities.

Exactly a year earlier, after the governments of the region attacked an LRA position, the rebels retaliated by killing at least 865 civilians during the Christmas 2008 holiday season, according to Human Rights Watch.

The attack three months ago was especially horrific. Children abducted by the rebels were forced to execute other children who had disobeyed the rebels. In several instances documented by the rights group, the children were ordered to form a circle around their victim and take turns hitting the child on the head with a heavy object until the child died.

Adults were mutilated and sent back to their villages to act as a visual warning to those that might have considered alerting authorities.

In one instance the rebels cut off the lips and an ear of six victims who were sent back "with a chilling warning to others that anyone who heard or spoke about the LRA would be similarly punished," says the report.