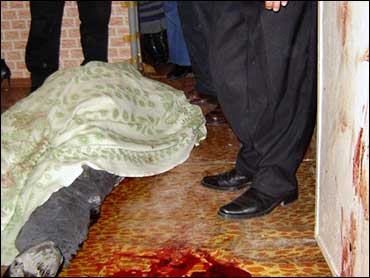 Kidnappers in Iraq, political assassins in Beirut, and hit men in the Philippines made murder the leading cause of work-related deaths among journalists worldwide in 2005, a new analysis by the Committee to Protect Journalists shows.

Forty-seven journalists were killed in 2005, more than three-quarters of whom were murdered to silence their criticism or punish them for their work, CPJs annual survey found. That compares with 57 deaths in 2004, just under two-thirds of which were murders.

Iraq, the most dangerous place for journalists in 2005, also became the deadliest conflict for the media since the Committee to Protect Journalists began keeping tallies 24 years ago.

A total of 60 journalists have been killed on duty in Iraq from the beginning of the U.S.-led invasion in March 2003 through the end of 2005. The toll surpasses the 58 journalists killed in the Algerian conflict from 1993 to 1996.

CPJs analysis also documented a long-term trend — those who murder journalists usually go unpunished. Slayings were carried out with impunity about 90 percent of the time in 2005, a figure consistent with data collected by CPJ over more than a decade. Less than 15 percent of journalist murders since 1992 have resulted in the arrest and prosecution of those who ordered the killings.

Although the 2005 toll reflected a decline from the previous year, it was still well above the annual average of 34 deaths that CPJ has documented over the past 10 years. In fact, 104 journalists were killed in 2004 and 2005, making it the deadliest two-year period since the war in Algeria raged a decade ago.

"Too many journalists have lost their lives just because they were doing their jobs, and unresponsive governments bear responsibility for the toll," CPJ Executive Director Ann Cooper said.

"The war in Iraq might lead one to think that reporters are losing their lives on the battlefield. But the fact is that three out of four journalists killed around the world are singled out for murder, and their killers are rarely brought to justice. Its a terrible indictment of governments that let warlords and criminals dictate the news their citizens can see and hear," Cooper said.

Iraq accounted for 22 deaths in 2005, or nearly half of the years total, CPJ found. Yet even in that conflict zone, murder accounted for more than 70 percent of the deaths documented by CPJ. The prevalence of targeted killings reflected the evolving threat in Iraq, where crossfire had been the leading cause of death the previous two years. Fatal abductions emerged as a particularly disturbing trend as at least eight journalists were kidnapped and slain in 2005, compared with one fatal abduction the previous year.

Iraqi journalists bore the brunt of these attacks as it became increasingly hazardous for foreign reporters and photojournalists to work in the field. American freelancer Steven Vincent was the only foreign journalist to be killed in Iraq in 2005; five foreigners died there a year earlier.

At least three journalists were killed as a result of fire from U.S. forces, compared with six such deaths in 2004. U.S. forces fire has killed 13 journalists between March 2003 and the end of 2005.

The Philippines, where outspoken radio journalists have been murdered in alarming numbers, was the second deadliest place in 2005. CPJ documented four murders in the Philippines, a decline from the eight recorded in 2004. The drop was due in part to more concerted national law enforcement, CPJs analysis found.

Six countries recorded two deaths each in 2005. Prominent Lebanese columnists Samir Qassir and Gebran Tueni — both of whom were well-known for their biting criticism of the Syrian government and its influence over Lebanon — were killed in separate car bombings in Beirut. A third Lebanese journalist was maimed in another car bombing. The other countries with two killings were Russia, Bangladesh, Pakistan, Sri Lanka, and Somalia.

The Americas showed a marked improvement with four confirmed deaths in 2005, down from eight a year earlier. But many journalists in the region attributed the drop to increased self-censorship, a phenomenon that CPJ found prevalent in Colombia and Mexico.