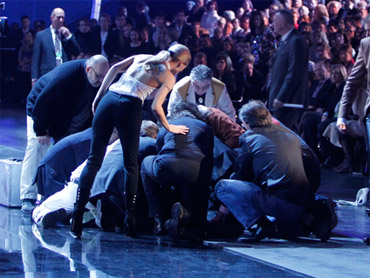 Bowing to pressure from furious families of victims of the 2001 World Trade Center terror attacks, Gov. George Pataki on Wednesday removed a proposed freedom museum from the space reserved for it at ground zero, saying the project had aroused "too much opposition, too much controversy."

He left open the possibility that a new spot at the former World Trade Center site could be found for the International Freedom Center, but officials for the proposed museum said they considered the project dead.

The decision followed months of acrimony over the International Freedom Center, with Sept. 11 families and politicians saying that the museum would overshadow and take space from a separate memorial devoted to the 2,749 World Trade Center dead and would dishonor them by fostering debate about the attacks and other world events.

"Freedom should unify us. This center has not," Pataki said. "Today there remains too much opposition, too much controversy over the programming of the IFC. ... We must move forward with our first priority, the creation of an inspiring memorial to pay tribute to our lost loved ones and tell their stories to the world."

Pataki said the Freedom Center cannot be part of a cultural building located near the proposed trade center memorial. But he left open the possibility that the center could find a home elsewhere on the 16-acre (6.4-hectare) site.

Pataki said he would direct the Lower Manhattan Development Corp. — the agency he created to rebuild the site — to explore other locations for the center.

Freedom Center officials, however, said in a statement that they do not believe there is a viable alternative location at the trade center site.

"We consider our work, therefore, to have been brought to an end," the museum said. "We are deeply disappointed that the will could not be found to continue the development of the International Freedom Center at this hallowed site."

A campaign by some Sept. 11 families to oust the museum from space reserved for it at ground zero had grown in recent months to include four police and fire unions, an online petition with more than 40,000 signatures, and several politicians including Sen. Hillary Rodham Clinton and former Mayor Rudolph Giuliani.

"Goodbye and good riddance," said Rep. Vito Fossella, one of three congressmen who had threatened hearings on federal funding if the museum stayed where it was. "The IFC will not stand on the hallowed grounds of the World Trade Center site."

In addition to the terrorist attacks, the Freedom Center planned exhibits on such topics as Abraham Lincoln, the Rev. Martin Luther King Jr., the fall of the Berlin Wall, the civil rights movement, the Declaration of Independence and the South African constitution.

The museum would also include a section on the world's response to Sept. 11 and a film that links the victims' backgrounds to periods in history.

Opponents charged the museum could include inappropriate exhibits that would distract attention from the proposed memorial and could foster anti-American debate about the Sept. 11, 2001, terrorist attacks.

Some families have opposed the museum as much for its location as its content; they say it would sit in a prominent part of ground zero that would obscure the memorial museum.

Although most families who have expressed opinions are against the Freedom Center, a few have supported it, including the proposed museum's vice chairman, Paula Grant Berry, whose husband died at the trade center.

Rebuilders are planning a separate, underground Sept. 11 memorial museum. On the rest of the 16-acre site, they are planning five office towers, a performing arts complex and a transit hub.