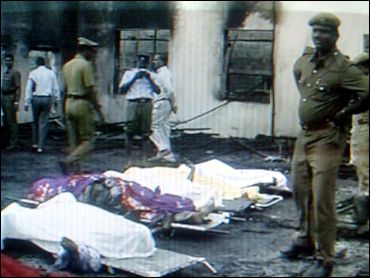 A fire tore through a makeshift wedding hall in southern India Friday, killing 45 people, including the groom, and injuring the bride and dozens of guests, officials said.

The cause of the blaze was unclear, but police speculated that an electrical short or decorative lights ignited the thatch-roofed marriage pavilion on the terrace of a one-story building.

"The fire started suddenly and spread all over the roof very quickly," said S. Rangayyan, a work colleague of the groom who attended the wedding. "The stair was just two feet wide. Only one person can go through it at a time," he said.

Some victims were burned, while others were crushed in the stampede down the staircase.

"Old people, women and children could not force their way out," said Rangayyan told The Associated Press by telephone.

"Forty-five bodies have been recovered," said K. Manivasan, the top administrator for Tiruchi district in southern Tamil Nadu state, where the fire broke out at 8:45 a.m.

"About 60 have been admitted to various hospitals, some with burn injuries and others with injuries sustained in the stampede," he said.

The bride, Jaishree Ramanathan, 35, a schoolteacher, was in serious condition with burns, Manivasan said. The groom, Guru Raghavender, 38, worked at an insurance company. Of the dead, 20 were women and six were children, Manivasan said.

"Eyewitnesses have told me that the thatched roof caught fire and fell over people's heads," said Santhana Krishnan, a state agricultural officer whose aunt and uncle were injured at the wedding and were in intensive care at a private hospital.

"They all panicked and ran in all directions. They stepped on each other," said Krishnan.

District Police Commissioner Sunil Kumar Singh said the fire was probably caused by an electrical short-circuit, although officials were not sure.

Press Trust of India quoted other police officers as saying that a string of garland lights that normally decorate Indian weddings had sparked the blaze. Some witnesses told TV stations a man recording the wedding on video had just plugged in a high intensity light when the fire started.

The wedding was taking place early in the morning because it was an auspicious day in the Hindu calendar, and marriage halls were fully booked in the town. The survivor Rangayyan said weddings are normally held in a hall on the ground floor, but a temporary pavilion was erected on the first floor of the building terrace because there were so many guests.

The building was 300 feet from the 10th century Sri Ranganathaswamy Temple, the main attraction in the town.

Tragedies at weddings in India are common, although they usually involve overloaded buses and trucks full of wedding guests that run off roads, or boats carrying the wedding party that capsize. Overcrowding is common at public events in India, the world's second most populous nation, with more than 1 billion people.