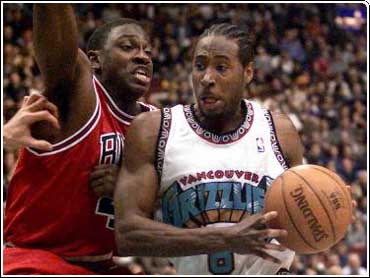 The Vancouver Grizzlies were on the right end of a record rout for a change.

Michael Dickerson scored 20 points and the Grizzlies, routed more times then they care to remember in their five-year history, breezed to a 101-76 victory over the Chicago Bulls on Friday night.

The 25-point win was the largest ever for Vancouver (13-32), which defeated the Bulls (9-35) for the first time in eight meetings.

"They focused on defense right from the start," said Grizzlies interim coach Lionel Hollins, 9-14 since taking over from Brian Hill on Dec. 16.

Mike Bibby added 16 points for the Grizzlies, who thrilled the crowd of 15,357 fans, which included prospective owner Michael Heisley.

Vancouver held Chicago scoreless for a 12:05 stretch in the second half as it pulled away from a 58-44 halftime lead.

"He said he wanted us to play a 48-minute game on defense," Doug West said.

The 76 points allowed was the second-fewest allowed in franchise history.

The Bulls, coming off an 88-81 road win Wednesday in Seattle, got no closer than 10 points in the contest after the first quarter in dropping their 19th game in 22 road outings this season.

"They deserved everything they got, especially because of what they did defensively," said Bulls coach Tim Floyd. "It was a really disappointing night. We didn't see it coming."

The Bulls missed forward Dickey Simpkins, who was given permission to leave the club to attend a family matter.

Vancouver took a 37-20 lead in the first quarter.

"Their lineup change hurt them more than helped them," said Hollins. "They went small to start the game and they weren't making shots and we were able to rebound and get out ad run."

Toni Kukoc led the Bulls with 27 points, and Elton Brand had 22.