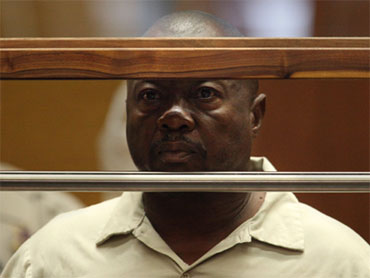 (CBS/AP) LOS ANGELES - Los Angeles detectives said Tuesday they believe the suspect in the "Grim Sleeper" serial killings, Lonnie Franklin Jr., could be responsible for up to eight additional murders, but say the likelihood is strongest for three women whose photos were found in a secret stash in a refrigerator.

Police asked for the public's help in locating those three women and displayed their recovered photos at a news conference, along with pictures of four others whose families reported them missing in the neighborhood where suspect Lonnie Franklin Jr. lived.

The eighth victim is believed to be an unsolved murder dating from 1988.

Franklin was arrested last July and indicted earlier this month on 10 counts of murder and one attempted murder in connection with a string of shooting and strangling slaying that started in the 1980s and extended into the 2000s.

Franklin has pleaded not guilty and is in jail awaiting trial.

Police are focusing on the three women because their IDs and photos were found in a fridge in Franklin's garage in a stash that also contained a picture of a woman Franklin is charged with killing - Janecia Peters.

The collection of photos contained the Nevada ID and sexually explicit photos of Rolenia Morris, 29, who disappeared in September 2005, the high school ID of Ayellah Marshall, 18, who went missing in February 2005, the photo of an unidentified woman, and another photo of a woman that was too dark to make out, in addition to the Peters photo.

The other four missing women detectives believe could be Franklin's victims were brought to police attention by family members after his arrest last July.

While the serial killer was named the Grim Sleeper because of a supposed 14-year gap between killings, the police are starting to believe there are many more victims.

"We're going to start filling in that gap," said Detective Dennis Kilcoyne. "I don't think he stopped for a minute."

Complete coverage of the "Grim Sleeper" on Crimesider