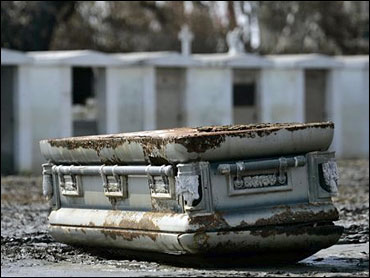 Even as officials tout progress being made in pumping water and getting services restored in New Orleans, there is no escaping the deadly consequences of the hurricane and the flood.

The bodies of more than 40 mostly elderly patients were found in a flooded-out hospital in the biggest known cluster of corpses to be discovered so far in hurricane-ravaged New Orleans.

The exact circumstances under which they died were unclear, with at least one hospital official saying Monday that at least a few of the patients were dead before the storm, and another saying the rising temperature in the hospital afterward likely contributed to some of the deaths.

For those who did survive the storm and its aftermath, reports CBS News Correspondent Randall Pinkston, the concern now is when they can go home. At a crowded meeting at the state capitol, residents of St. Bernard's Parish were told it would be at least 4 months before they could return to their flood ravaged neighborhood.

President Bush toured New Orleans Monday in an open truck with the governor and mayor, ducking under low-hanging tree limbs and electrical wires.

He issued a stern denial that race and poverty played a role in what some have labeled as a slow response to stranded victims by the federal government.

"The hurricane didn't discriminate and neither will the recovery effort," the president said.

He said the federal government would look increasingly to state and local officials for guidance on rebuilding the devastated communities along the Gulf Coast.

Chertoff said that teams of federal auditors were being dispatched to the stricken areas to make sure that billions of dollars worth of government contracts were being properly spent.

Rarely has a White House favorite fallen so far so fast, reports CBS News Correspondent Jim Stewart. Little more than a week ago FEMA Director Mike Brown was lavished with praise for his job on Hurricane Katrina. The president even called him by nickname — "Brownie, you're doing a heck of a job." — but a week later, he's been replaced. And it's likely he won't be last to lose his job over the debacle.

"That's life in the big city. If you're the leader of a big organization that's stumbling, you'll probably get relieved," said CBS News Consultant Randy Larsen on The Early Show.

The interim appointment of Paulison, with 30 years experience, "looks like a real smart decision to me," Larsen said.

Despite miles of still flooded streets, there were encouraging signs of recovery in New Orleans: Nearly two-thirds of southeastern Louisiana's water treatment plants were up and running. Forty-one of 174 permanent pumps were in operation, on pace to help drain the still half-flooded city by Oct. 8.

But that doesn't mean a quick return to normalcy for residents or for business owners, who were let back in Monday to assess the damage and begin the slow process of starting over.

It will be at least three months before New Orleans' public water system is fully operational, said Sgt. John Zeller, a California National Guard engineer working on the systems. Some homes have running water now, but it's mostly untreated Mississippi River water — for anyone wanting a bath, "It's like jumping in the river right now," he said.

Others will find their homes aren't even livable.

FEMA already expects to be providing temporary housing for some 200,000 hurricane victims for up to five years, most of them in Louisiana. It plans to use trailer homes to create "temporary cities," some with populations up to 25,000, said Brad Fair, head of the FEMA housing effort.

"This may not be quite on the scale of building the pyramids, but it's close," Fair said. He had no cost estimates.

In New Orleans, a contractor was back at one of the previously repaired levees after water was found to be seeping through. Brig. Gen. Doug Pritt of the Oregon National Guard described it as a minor leak.

Insurance experts have doubled to at least $40 billion their estimate of insured losses caused by Katrina. Risk Management Solutions Inc. of Newark, California, put the total economic damage at more than $125 billion.