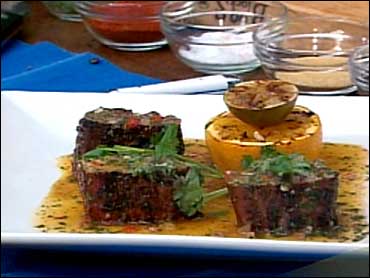 It's July Fourth weekend. What more needs to be said, other than pull out the grill?

If your gathering is a small one and you really want to serve your guests the best, then splurge a little. This year, try Spanish Spice Pork Tenderloin with Guava Glaze and Orange-Habanero Mojo.

Boneless pork tenderloin makes a delicious roast, and has the extra advantage of being speedy to cook – it's a great meat for someone just home from work. Pork tenderloin's delicate flavor and buttery tenderness also make it an ideal cut for a small dinner party. The meat is mild enough to pair with many flavors: fruit, chiles, Indian and Thai spices, mushrooms of all sorts. It can also be cooked by any dry heat method, such as roasting, grilling, or sauteing.

This type of tenderloin is the leanest cut of pork, with about the same amount of fat as a serving of skinless chicken breast. But don't confuse the pork tenderloin with the pork loin. The tenderloin is much smaller ( 3/4 to 1-1/2 pounds), whereas the entire loin is typically about 7 pounds.

Be mindful not to overcook the tenderloin, which is easy to do given its size and virtual absence of fat. Because the tenderloin has such a small diameter, two are often tied together to increase thickness and prevent overcooking. This preparation gives an added flavor bonus, also making it easier to stuff.

The following is the recipe Flay demonstrates on Thursday's The Early Show:

Whisk together all ingredients in a bowl, set aside.

Whisk together ingredients in a small bowl and season with salt and pepper to taste.

Heat oil in a pan on the side burner of the grill, or on the grates. Add onion and garlic and cook until soft. Add lime juice, orange juice and habanero, and bring to a boil. Cook until reduced by half, season with salt and pepper, add cilantro and cumin.

Heat grill to high. Rub each tenderloin with a few tablespoons of the spice mixture , drizzle with oil with oil and grill for 4-5 minutes per side, brushing with the guava glaze every few minutes. Remove from the grill, brush with more of the glaze and let rest for 10 minutes. Slice into 1/2-inch thick slices and drizzle with the Orange-Habanero Mojo.