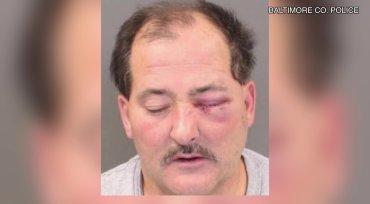 DUNDALK, Md. -- A stolen bite out of his grilled cheese sandwich led a Maryland man to fire a shot inside his house and barricade himself for hours.

Baltimore County police spokesman Shawn Vinson says the dispute began about 5 p.m. Sunday at a Dundalk home. The man’s wife told police she had been making dinner in the kitchen when her husband fired a shot up through the floor from the basement, reports CBS Baltimore. She told police her husband was angry at her because she had taken a bite from his grilled cheese sandwich.

The wife reportedly went into the basement, where she saw the man surrounded by guns and ammo. He briefly came upstairs before going back into the basement and firing three more shots up through the basement floor near where his wife was standing, the station reports.

The woman fled the house with three teens, but the man barricaded himself inside. Officers responded and he surrendered after about three hours. Officers reportedly subdued him with pepper balls.

The department said in a news release Monday that 55-year-old Daniel Blackwell has been charged with attempted murder and other offenses.

Police told the station they found fifteen guns inside the home. Blackwell is reportedly not allowed to own guns because of prior assault convictions.

Police report Blackwell was wearing an ammunition holster when he came outside, but was not armed with a weapon, the station reports. Police reportedly did find a loaded, lever-action long gun with a chambered round placed just inside the front door.