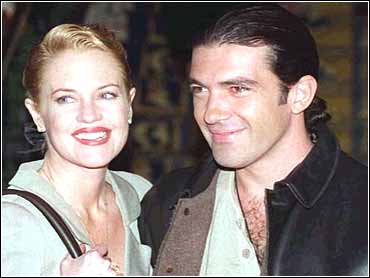 Actress Melanie Griffith has entered a hospital program to treat an addiction to prescription drugs, her publicist said Tuesday.

"My doctor has referred me to the Daniel Freeman Hospital to step down from the prescribed medication that I have been taking for a neck injury," Griffith said in a statement released to reporters through her publicist. "I appreciate everyone's concern and I am sure that you will respect my and my family's privacy."

This is not the first time the 43-year-old actress has been in rehab. Griffith — who won a Golden Globe and an Academy Award nomination for her pivotal role as a savvy "bimbo" secretary in the 1988 film, Working Girl — struggled with an addiction to drugs and alcohol in the late 1980s.

A hospital spokeswoman would not comment on Griffith's treatment except to say that patients at the nonprofit Catholic facility in the Marina Del Rey section of Los Angeles generally go through a 12-step in-patient program with time spent in fellowship and reading.

In a message posted on her Web Site recently, Griffith said she would be appearing on ABC's morning television talk show, The View on Wednesday and it was unclear whether the show, taping in Los Angeles this week, had replaced her as a guest. An ABC spokesman was unavailable for comment.

Griffith is the daughter of actress Tippi Hedrin, one of Alfred Hitchcock's favorite leading ladies. Known for her kewpie-doll voice and sultry good looks, Griffith has appeared in more than 50 films, including Brian DePalma's Body Double (1984), Something Wild (1986), Bonfire of the Vanities (1990) and Lolita (1997). She has been married four times, twice to actor Don Johnson, and she has three children.

She met her current husband, actor Antonio Banderas, in 1995 while working with him on the romantic comedy film Two Much.