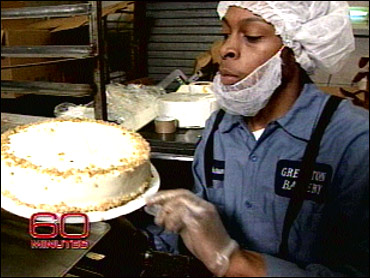 How did a bakery in Yonkers, N.Y. --a small, slightly disheveled city next door to the Bronx -- end up not only making cakes for the rich and famous, but also supporting the poor and disenfranchised?

As Correspondent Bob Simon first reported this winter, the Greyston Bakery is a social experiment that started more than 20 years ago with the goal of employing the chronically unemployed, getting them off the streets and back into the work force.

The profits from the bakery, which does make a profit, are used to help fund day-care centers, health clinics and counseling services.

Today, the Greyston bakery has become a role model for companies that want to inject some social action into their business.

The Greyston Bakery is in an old building in a section of Yonkers where the well-heeled do not walk. Inside a few cramped rooms, the bakers make gourmet cakes which are served at the finest restaurants -chocolate cakes, mousse cakes, lemon cakes. They also bake wedding cakes, and cakes that have been served at the White House.

It's a $5-million-a year-business. But the bakery doesn't hire people to make cakes. It makes cakes to hire people like Rodney Johnson, a former drug dealer. He got his GED in jail and his first legal job at Greyston.

He was making $5 an hour when he first started working at the bakery - a small sum compared to the $2,000-3,000 on a good week that he was making in the streets.

How did he manage to stick with this job – and why?

"I had a child. I wanted to show her something different," says Johnson, who adds that his drug dealing taught him some useful job skills. "When it comes to having a job to get done, you know, we try, at the bakery, we try to meet that quota. You know, in the streets, when I had "X" amount of drugs, I tried to meet that quota."

It's business. But Johnson says that at the end of the day, "I don't have to worry about police coming. I don't have to stash crack, run into buildings, things of that nature."

Johnson now makes cakes and brownies, and he says he owes much of his turnaround in life to Julius Walls, the CEO of the bakery, who gave him and others like him a chance.

Walls was studying to be a Catholic priest, but left that calling to have a family and enter the business world. He now calls Greyston his ministry, and he believes anyone deserves a chance to work.

The bakery has a unique hiring policy. Every other Wednesday is open hiring day. Applicants gather outside the bakery. How do they decide whom to hire?

"It is somewhat by chance because we number the applications, and so whichever guy shows up first," says Walls.

Most new employees start out as apprentices, working on the brownie line, where the work is repetitive and the temperature can get up to 90 degrees. About half drop out, but the other half go on to get full-time jobs with decent pay and benefits.

Why run it for profit? Why not just run it as a charity?

"We understand that most people that come to work for us aren't gonna stay with us forever. And they're gonna have to go out and work for someone else," says Walls. "And we want them to understand what it means to have a real job."

The bakery employs some 65 people, like Dieulane Philogene, who left Haiti as a child and became a homeless teenage mother. She was 11 when she came to America, and she's been on her own since she was 14.

"At some point, I ended up being in a shelter and stayed there for about a good couple of months or so. And I didn't think that was a good thing for me either and I got pregnant and left school," says Philogene, who applied to Greyston and was told to keep in touch.

"And so I went to Greyston every morning, and I stood in front and waited until a position was given to me. And one day they told me they had a full week's work for me and oh, I was so excited!"

Today, Philogene works in accounting at Greyston and provides a stable home for herself and her two children. And Johnson, who's been at Greyston nine years, is the production manager of the entire bakery.

Does it make any difference that he's making very fine bakery products as opposed to doorknobs?

"There's a little more love and finesse put into a cake as opposed to a doorknob, unless it's an elegant doorknob for a mansion," says Johnson. "But I like cakes. Cakes are good. Cakes have been good to me."

Walls showed Simon one cake, called A Lotus in Mud. "As in lotus flower in muddy waters," he says. "That's the lotus flower, hand made, butter cream. Again, made from scratch and made with real butter."

Greyston cakes are sold at gourmet food shops, on the Internet and at upscale restaurants.

Do these famous restaurants where Walls sell his cakes know who's making them?

"Some do. Some don't, don't know at all. I mean the most interesting thing about most famous restaurants, who I can't name, is because they actually put the cakes out and say they made them," says Walls.

If Greyston is an unusual place, it had an unusual founder. Bernie Glassman from Brooklyn was a Jewish aerospace engineer who said goodbye to all that, and became a Buddhist priest with a bent for social activism.

"I wanted to show that people that are homeless, if they're given the chance and the right training, could not only work in our labor force but can produce the high niche items of our society. They could produce items that only the French chefs could create," says Glassman. "We had a tremendous amount of obstacles [in the beginning]. Almost, we almost went broke a few times."

"The brownies all stuck together. And they clumped into this 50-pound block of brownie. When we got these huge blocks of 50-pound brownies, it was really hard to pull 'em apart and mostly we got little bits of brownies," says Cohen.

"'We said, 'Well, what can we do with these little bits of brownies?' And said, 'Well, we'll try shoving them in chocolate ice cream and make chocolate fudge brownie ice cream.' And that's how the flavor came into being."

In fact, today Greyston's brownies are in three of Ben and Jerry's top selling flavors, including, of course, chocolate fudge brownie. The bakery makes 11,000 pounds of brownies a day -- just for Ben and Jerry's.

All the bakery's profits go into the Greyston Foundation, a non-profit organization that runs programs for needy families in Yonkers, whether or not they work for the bakery.

The foundation's funding doesn't come only from the brownies. It comes from grants, other business ventures, and private donations –- and the idea is that giving people jobs is fine, but it's not enough. The foundation offers even more, including a computer class for school-age kids, and a clinic for people who are HIV positive.

Angela Rodriguez came to Greyston's HIV clinic more than four years ago, after she learned that she'd been infected by her husband, who has since died of AIDS.

"I wanted to die, at that moment I wanted to die and I went into a deep depression 'cause I didn't know how to handle the situation," says Rodriguez. "I was a very angry person. I would take my husband out of the grave and kill him again. Every time I got angry, I would take him out and kill him and put him back. And you know, this anger just kept building up and up and up."

She got her anger down after working with counselors at Greyston. She also got her life back on track. She now works at Greyston as a part-time receptionist. She's taking some college courses and hopes to become an HIV counselor.

Another success story for the Greyston Foundation is Jamilla Shabazz and her family. She was unemployed for years, not because she didn't want to work, but because she was afraid to leave her kids alone in the drug-infested neighborhood where they lived.

"Where I was living, it just, my children, one, could never go outside and play because it was too dangerous because of the drugs, because of the guns, and the fighting constantly," says Shabazz.

That all changed when Jamilla and her family moved into a safe, clean, low-rent apartment owned by the Greyston Foundation. It also came with an unimaginable luxury: day care.

"The day care was great. It was a great feeling to know that your children are safe," says Shabazz, who found a job working with kids. Her oldest son, Kevin, got a scholarship from the Greyston Foundation to help pay for college.

The little bakery that started it all is about to become a bigger bakery, which will, presumably, help more people.

Architect Maya Lin, whose past projects include the Vietnam Memorial in Washington, designed the new Greyston Bakery building. "We were going to try to get light to filter through all levels of the bakery," says Lin.

The building she designed is nothing like the cramped space the bakery is in now. She wanted a clean, well-lighted place with high ceilings and low construction costs.

"I couldn't resist getting drawn into it. One, because of what they do. Two, it's sort of a very happy, very fun, very challenging design problem," says Lin.

Greyston hopes to be able to employ nearly twice as many people in this new space and quadruple its profits.

Walls has discovered that running a profitable business is a better way to do good works than running a charity.

"Do good and do well. It's called a double bottom line. Our social mission is as important as our business mission," says Walls. "Our people are as important as the dollars we make."

And he says he hopes people will keep that in mind when they're shopping for desert: "Let 'em eat cake."

Last spring, Greyston moved in to its new, bigger bakery - which is good because, according to Julius Walls, cake sales have more than doubled since 60 Minutes first broadcast this story.
Thanks for reading CBS NEWS.
Create your free account or log in
for more features.
View CBS News In
CBS News App Open
Chrome Safari Continue
Be the first to know
Get browser notifications for breaking news, live events, and exclusive reporting.