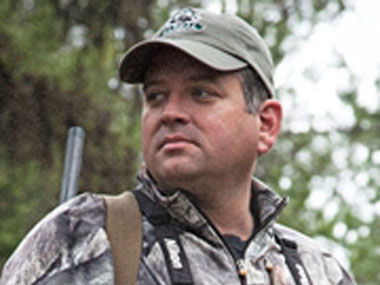 Wayne Bengston, 41, then beat his wife, took his 2-year-old son to a relative's house and drove to his home about 25 miles away in West Glacier, where he apparently killed himself, Whitefish police said.

The victim, Rodriguez, was 43, from Sugar Land, Texas. Bengston's wife told police that Rodriguez was in town on business and visiting her at her mother's house in Whitefish when her husband showed up Thursday night.

It wasn't clear how Rodriguez and the woman were acquainted.

After the shooting, Flathead County sheriff's deputies found Bengston's truck parked in his driveway. Efforts by a police SWAT team to contact Bengston inside the house were unsuccessful, and officers found the man's body with an apparently self-inflicted gunshot wound to the head, police said.

Besides appearing on TV, Rodriguez was the founder and CEO of Global Adventure Outfitters. According to the outfitter's website, he was an editor at Shooting Times Magazine and a contributing editor at Petersen's Hunting, Guns & Ammo and Dangerous Game.

He was a mortgage banker before founding Global Adventure Outfitters, and he has hunted in 21 countries, the website says.

"A Rifleman's Journal" tracked Rodriguez's hunting travels to exotic locations, according to a Sportsman Channel description.

He had a wife and two children, it says.

A woman who answered the phone at Global Adventure Outfitters Friday confirmed Rodriguez had been in Montana, but said the organization would not be making a statement at the time.