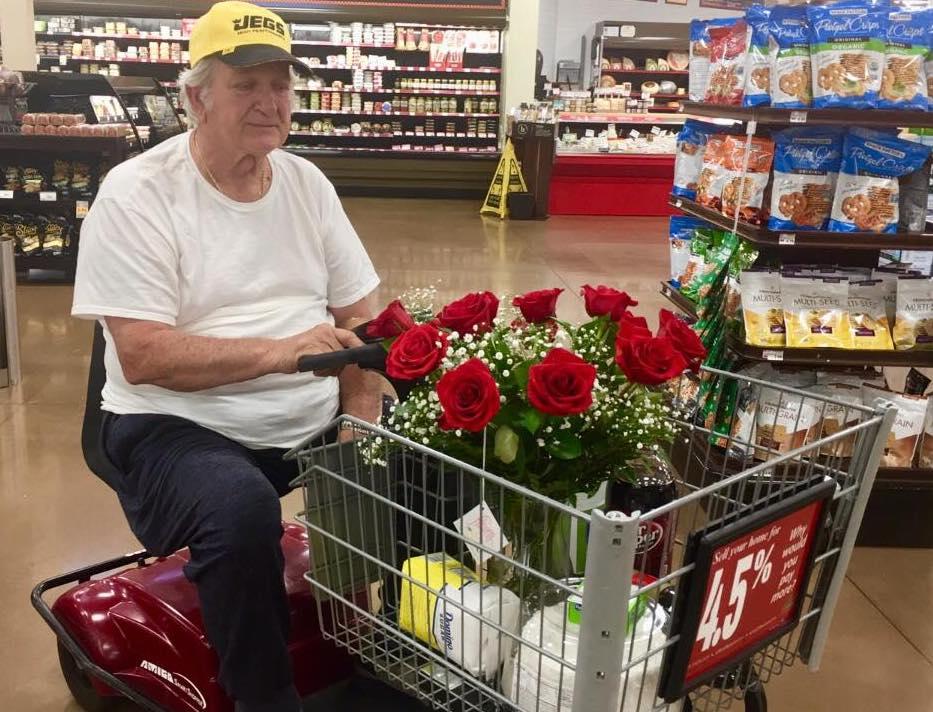 Gregory R. Johnson saw an elderly man at the supermarket with red roses and a birthday cake in his cart. Thinking he was celebrating a happy occasion, Johnson struck up a conversation, but soon discovered the birthday girl died five years ago.

Johnson wrote in a Facebook post that he was on a trip to his local Kroger supermarket Tuesday in Greenwood, Indiana, when he stood next to an older man in a shopping wheelchair at the deli counter.

"He had a dozen roses and a big birthday cake in his cart," Johnson said, "I made the comment, 'it looks like you've got a big night planned.' He glanced up at me with the saddest eyes I believe I've ever seen and told me his story."

The man was celebrating a birthday, but he was doing it alone. Johnson said the man, referred to as "Jim," lost his wife five years earlier and still stuck to a birthday tradition every year. "He would put the roses on the table when he got home and cut them both a piece of birthday cake," Johnson recounted on Facebook.

"My heart just broke. I was just devastated and he looked completely broken. And I knew that I wanted to do whatever I could in that moment to take his mind off of his heartbreak,"Johnson told CBS News, "So I starting asking him questions about their life together and I believe his reminiscing made him feel better."

Johnson spoke with the man for over 90 minutes and learned all about the life he had shared with his wife, Gloria, of 53 years. Jim met his wife while in high school -- she was a cheerleader of Jim's rival school basketball team -- where he was the star player. After Jim's team beat Gloria's, he invited her to watch him play the following night. She showed up and they had been together ever since.

Early in their conversation, the Kroger store manager asked to take a photo of Jim with his flowers to put on the market's bulletin board, which Johnson learned was a yearly tradition.

As the two men continued to speak, the manager asked Johnson to be in another photo with Jim, and there was a clear difference between the two images.

"Now there was a grin on his face where in the earlier picture, a sad defeated man was photographed with his roses and birthday cake. He was happy in the moment," Johnson wrote on Facebook.

As the conversation began to wind down, Jim asked Johnson if he would come come back to his home, share the cake and put the flowers on display. "I simply looked at him and told him I'd be honored to sit at his table and have a piece of cake with him in remembrance of his wife," recounted Johnson.

So, the two men celebrated Jim's beloved wife together at his home, looking at old photos and enjoying each other's company. Johnson told his new friend that they will get together again soon for lunch or dinner and Jim "seemed to like hearing that."

What would have been an ordinary evening turned into an extraordinary one. "Hopefully I made that little old man's night a tad bit better," wrote Johnson, "because he certainly made mine one of the best I've had in a long time."