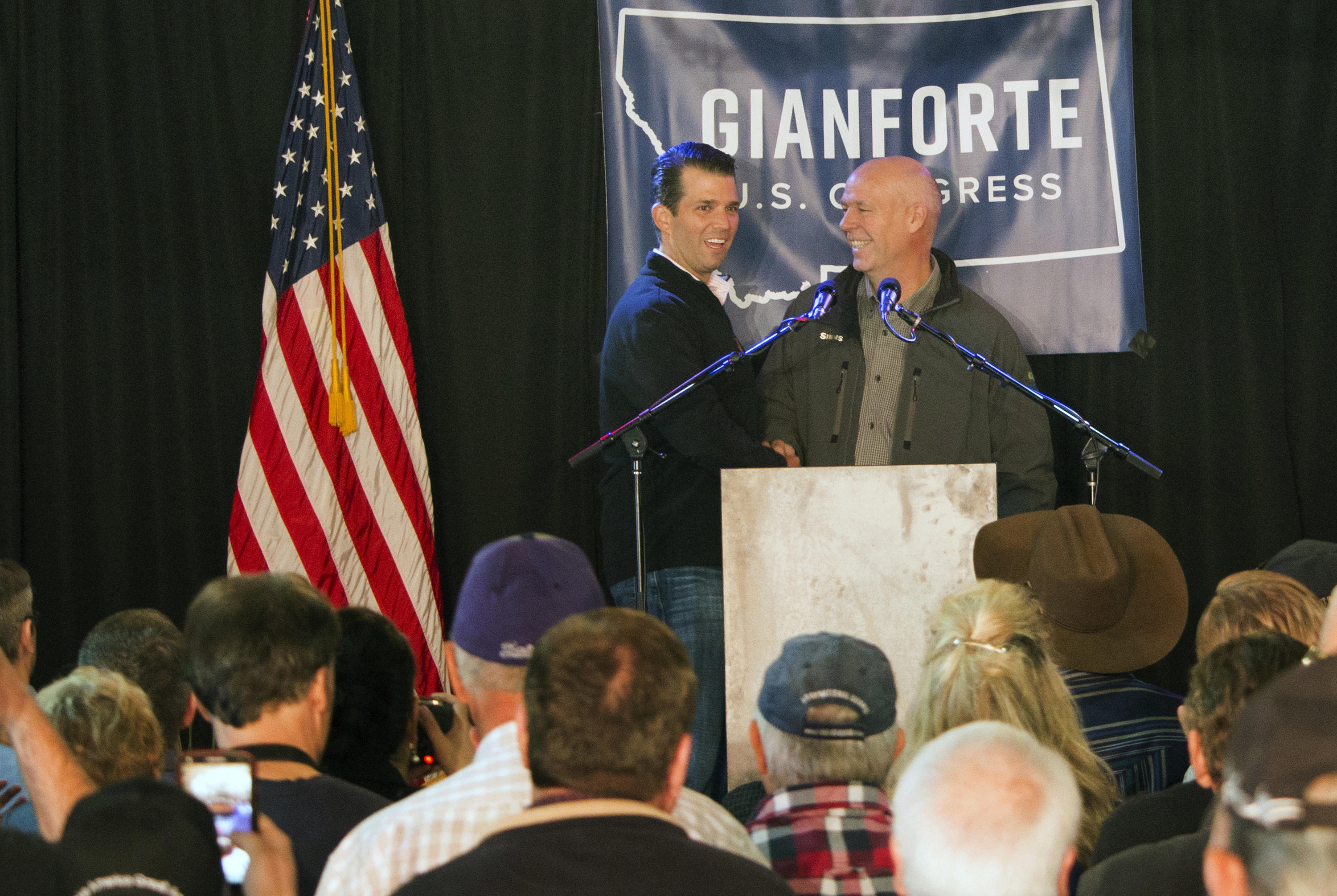 Greg Gianforte, the Republican candidate in Thursday's special congressional election in Montana, allegedly "body slammed" a reporter for The Guardian last night at a meet-and-greet event. The reporter, Ben Jacobs, took to twitter to describe the incident and claimed the altercation broke his glasses. This development comes on the eve of a special election to replace congressman-turned Interior Secretary Ryan Zinke. Montana has only one U.S. representative.

Late Wednesday, the Gallatin County Sheriff's Office said Gianforte was cited for misdemeanor assault and has until June 7 to appear in court. The office said, "The nature of the injuries did not meet the statutory elements of felony assault."

At least two major Montana newspapers, the Billings Gazette, in the state's largest city, and the Missoulian, in Missoula, Montana's second-largest city, announced late Wednesday that they were rescinding their endorsements of Gianforte.

Jacobs reported in April that Gianforte has financial ties to Russian companies that have been sanctioned by the U.S.

Early Thursday, Guardian U.S. editor Lee Glendinning isued a statement saying, "The Guardian is deeply appalled by how our reporter, Ben Jacobs, was treated in the course of doing his job as a journalist while reporting on the Montana special election. We are committed to holding power to account and we stand by Ben and our team of reporters for the questions they ask and the reporting that is produced."

Audio of Wednesday's altercation reveals Jacobs asking a question about health care and the recently released Congressional Budget Office score, which Gianforte refuses to answer, saying, "Speak with Shane, please," likely a reference to his spokesperson, Shane Scanlon. Next, the sound is muffled by the ensuing altercation.

Jacobs, who was treated by an ambulance, has filed a police report.

Gianforte left without speaking to reporters.

The Gianforte campaign released this statement on the incident:

"Tonight, as Greg (Gianforte) was giving a separate interview in a private office, The Guardian's Ben Jacobs entered the office without permission, aggressively shoved a recorder in Greg's face, and began asking badgering questions," Scanlon said in a statement. "Jacobs was asked to leave. After asking Jacobs to lower the recorder, Jacobs declined. Greg then attempted to grab the phone that was pushed in his face. Jacobs grabbed Greg's wrist, and spun away from Greg, pushing them both to the ground. It's unfortunate that this aggressive behavior from a liberal journalist created this scene at our campaign volunteer BBQ."

Gootkin is a Gianforte supporter -- he donated $250 to Gianforte's campaign in March.

As of Wednesday, more than 250,000 ballots had already been mailed in. In November, roughly two thirds of the total vote was absentee.

Given that this special election takes place on a Thursday just before a holiday weekend -- and it's not the more customary Tuesday election -- it bears watching how many people actually vote in person Thursday, compared to those who have already voted.

Fox News was preparing for the "separate interview" Scanlon mentioned, and the Fox team saw the incident unfold. Fox News reporter Alicia Acuna wrote that she had been exchanging pleasantries just before their interview, when Jacobs walked into the room with his recorder, and "put it up to Gianforte's face and began asking if him if he had a response to the newly released Congressional Budget Office report on the American Health Care Act. Gianforte told him he would get to him later. Jacobs persisted with his question. Gianforte told him to talk to his press guy, Shane Scanlon."

"At that point, Gianforte grabbed Jacobs by the neck with both hands and slammed him into the ground behind him. Faith, Keith (Acuna's producer and crew) and I watched in disbelief as Gianforte then began punching the man, as he moved on top the reporter and began yelling something to the effect of 'I'm sick and tired of this!'

"Jacobs scrambled to his knees and said something about his glasses being broken. He asked Faith, Keith and myself for our names. In shock, we did not answer. He then said he wanted the police called and went to leave. Gianforte looked at the three of us and repeatedly apologized. At that point, I told him and Scanlon, who was now present, that we needed a moment. The men then left."

The outcome of contested Montana races are often known after midnight ET -- or even later.

On Friday morning, it may be evident if turnout surged on Election Day to impact the race beyond what was expected from a special election. But based on the rate of mail ballots, it already looked like turnout was going to be strong for this type of race.

The Guardian issued a statement Wednesday evening saying it is "deeply appalled" by the way Jacobs was treated. "We stand by Ben and our team of reporters for the questions they ask and the reporting that is produced," the statement read.