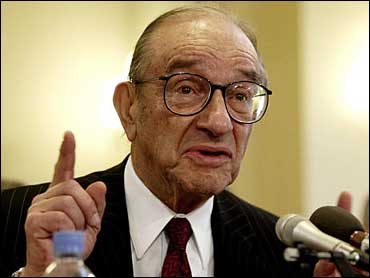 His pointed criticism of the Bush tax plan showed that Alan Greenspan, often taken to task for being too murky in his economic pronouncements, can be crystal clear when he wants to be.

The Federal Reserve chairman warned that further tax cuts should be paid for, leading Democrats to proclaim that Greenspan had delivered the "kiss of death" for President Bush's $1.3 trillion proposal.

GOP lawmakers fumed. Greenspan, himself a Republican, had stabbed them in the back, they said.

The White House went into damage-control mode, pointing out that Greenspan had endorsed the plan's centerpiece, elimination of the tax on stock dividends.

Private economists saw the episode last week as remarkable given Greenspan's deft touch, after more than 15 years on the job, in avoiding political mine fields. They wondered if Greenspan's blunt words were a sign of a man no longer worried about his future.

"It appears as though Greenspan either does not want to be reappointed as Fed chairman next year or has learned that he will not be reappointed," said Paul Kasriel, chief economist at Northern Trust Co. in Chicago.

Presidential aides quickly dismissed speculation that Greenspan's comments indicated a serious rift between the Fed and Mr. Bush, or that the administration had decided on Greenspan's successor.

"His term is not even expired until the middle of next year, so it's sort of silly to begin speculating about that," White House spokeswoman Claire Buchan said.

Greenspan came out in favor of a big tax cut that year and gave a major push to the new president. Greenspan reasoned that the 10-year projected surplus of $5.6 trillion gave Congress plenty of room to cut taxes and still accomplish his preferred goal: to reduce the national debt.

The surplus turned out to be illusory, however, eaten up by a recession, the fight against terrorism and the tax cut.

What was surprising about Greenspan's congressional testimony last week was not so much the warnings against further tax cuts, now that budget deficits have returned, but rather the extent of his criticism of the Mr. Bush program.

Greenspan said future tax cuts should be paid for, either by spending cuts or tax increases. Mr. Bush does not propose that. The Fed chairman also raised doubts about one of Mr. Bush's biggest selling points — that the economy needs another round of government stimulus.

Greenspan contended that once the uncertainty over war in Iraq passes, economic growth should accelerate without the need for additional tax cuts.

For good measure, he directly challenged the administration's "deficits don't matter" school of thought and the contention that economic growth alone can take care of the revenue lost from the tax cuts.

Some saw Greenspan's widespread critique as an effort to restore the credibility he lost on the deficit issue when he endorsed the 2001 tax cut. Others said Greenspan basically was doing what he always has done, calling it as he sees it, even at the risk of not being reappointed.

"If he had wanted to stay for another term, he might not have said anything different, but he might have said a little less," said David Wyss, chief economist at Standard & Poor's in New York.

During the 1990s boom, for which he received much credit, Greenspan was the subject of more favorable publicity than any Fed chairman in history. He also enjoyed broader bipartisan support than almost anyone else in Washington, and was hailed as a "genius" by both Democrats and Republicans.

However, his handling of the Fed has been sharply criticized by liberal economists who saw the Fed's series of increase hikes in 1999 and 2000 as the trigger for the current downturn.

Greenspan also has a history with the Bush family: Some blame his tight money policies in 1991 and 1992 for worsening the recession that doomed the first Bush presidency.

Greenspan's current term as chairman runs until June 20, 2004. Some think that Mr. Bush will nominate a replacement early next year so the Senate can confirm a successor to Greenspan before the presidential campaign gets into full swing.

One problem with that scenario is that unlike 1987, when Greenspan was Wall Street's universal choice to succeed Paul Volcker, there is no front-runner this time.

Mentioned as possible choices are Harvard economist Martin Feldstein, chairman of the Council of Economic Advisers during the Reagan administration, and Peter Fisher, a Democrat who is Treasury's undersecretary for domestic finance.

David Jones, who has written four books on the Greenspan Fed, said as long as Greenspan, who turns 77 next month, stays healthy, he may well stay on as chairman until Jan. 31, 2006, the date his 14-year term as a Fed board member expires. Current law makes him ineligible for another term on the board.

"The administration is distracted by the war right now, and next year Bush will be up for re-election," Jones said.

"I am betting that Greenspan will end up being asked to serve out his current term and then stay on for a year or two longer so that his replacement can be picked at the beginning of the next presidential term," he said.