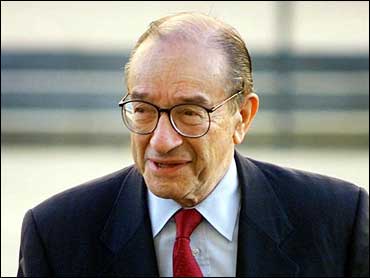 Greenspan told Congress that the steady removal of trade barriers over the past half century has contributed to the strong prosperity in recent decades. That prosperity could be jeopardized by barriers to protect domestic industries threatened by increased imports, he said.

"The United States has been in the forefront of the postwar opening up of international markets, much to our and the rest of the world's benefits," Greenspan said in prepared remarks. "It would be a great tragedy were that process stopped or reversed."

Greenspan was testifying before the Senate Finance Committee as Republicans attempted to build support for an effort by President Bush to win negotiating authority he needs to strike new trade agreements.

Greenspan, who has spoken often of the economic benefits that come from free trade, repeated those views Wednesday. In his prepared testimony, he made no mention of current economic conditions or the big plunge that has occurred in stock values.

Wall Street investors are hoping that the Fed, which has already cut interest rates three times this year, will do so again in an effort to jump-start economic growth and improve profit prospects for U.S. corporations.

Greenspan said he regretted the fact that supporters of free trade often contend that lowering barriers will promote jobs. He said greater trade flows, by spurring domestic companies to become more competitive, increases productivity but not the overall level of employment.

He cited as evidence that trade does not have a link to employment levels the fact that the nation's jobless rate dipped last year to the lowest point in three decades even as the trade deficit surged to a record high.

Greenspan said countries gain from trade simply by lowering barriers, whether or not other nations do so.

"Protecting markets from new technologies has never succeeded. Adjustments to newer technologies have been delayed, but only at significant costs," he said.

Addressing concerns raised by anti-globalization protesters, who grabbed headlines in Seattle in 1999 and in other economic events since that time, Greenspan called their views well-intentioned but "wrong-headed."

"It is essential to note that probably the best single action that the industrial countries could actually take to alleviate the terrible problem of poverty in many developing countries would be to open, unilaterally, markets to imports from these countries," Greenspan said. "These countries need more globalization, not less."

"Contrary to popular notions about anti-dumping suits, under U.S. law, it is not required to show evidence of predatory behavior," Greenspan said.

Currently, the U.S. steel industry is pushing for greater protection against a flood of imports.

Greenspan's appearance Wednesday followed a White House event on Monday in which Bush met with Democratic and Republican leaders in an effort to highlight the need for authority to negotiate new trade deals.

The administration would like to see progress in this effort before Bush travels to Quebec City, Quebec, later this month to meet with leaders of 33 other countries in the Western Hemisphere in an effort to advance negotiations to create a hemispherewide free-trade zone.