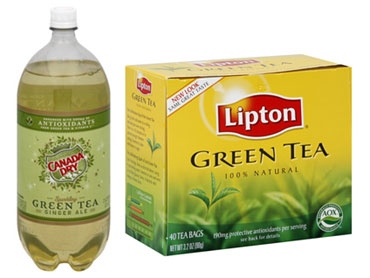 (CBS/AP) Green tea is good for you, right?

Like grapes and dark chocolate, it's full of antioxidants, which eat up DNA-damaging free radicals like Pac-Man eats up pellets.

In the case of the infused ginger ale, the FDA says the soda has no right to carry the claim that the drink is "enhanced with 200 mg of antioxidants from green tea and vitamin C" on its can, because the ingredients in the soda "are not nutrients with recognized antioxidant activity."

Unilever and the Dr. Pepper Snapple Group, the makers of the two beverages, are not alone. Manufacturers have increasingly been adding vitamins and nutrients to their products to make them more appealing to health-conscious consumers. The FDA stated that the agency "does not consider it appropriate to fortify snack foods such as carbonated beverages."

The FDA letter to Unilever, which owns Lipton, takes issue with a company website that mentions four studies that showed a cholesterol-lowering effect with tea. The agency calls the labeling misleading because it suggests Lipton tea is designed to treat or prevent disease. The agency also cites antioxidant labeling claims on the company's Lipton Green Tea, which do not follow U.S. federal guidelines.

The FDA asks executives from both companies to respond to the citations within 15 days and to outline their plans for addressing the problems.

Spokespersons for both the Dr. Pepper Snapple Group and Unilever issued separate statements indicating that they intend to cooperate to address the issues raised by the agency.

Once a niche market, nutrient-enriched beverages have grown into a multi-billion dollar business. In recent years, the FDA has begun cracking down on food companies that overstate the benefits of their products.