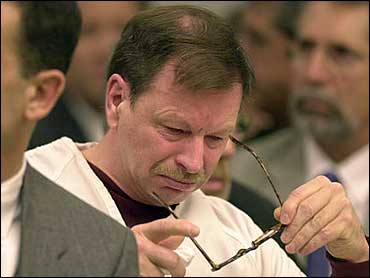 Gary Ridgway, the Green River Killer who terrorized Seattle in the early 1980s, tearfully apologized for "killing all those young ladies" as a judge sentenced him Thursday to life in prison without the chance of release.

After the court took a 48-second long moment of silence for his 48 victims, Ridgeway told the court he was sorry for "killing all those young ladies" and for the "scare" he put into the community, reports CBS News Radio.

"I have tried to remember as much as I could to help the detectives find and recover the ladies. I'm sorry for the scare I put into the community," said Ridgway.

After blistering Ridgway for his lack of compassion for the horror he brought to his victims, their families and the community, King County Superior Court Judge Richard Jones imposed 48 consecutive life sentences one at a time.

"The time has come for the final chapter of your reign of terror in our community," Jones said. "It is now time for our community to have peace from the Green River murders."

Prosecutors agreed to spare Ridgway the death penalty in exchange for his helping investigators find four previously undiscovered sets of remains and confessing to the murders, the most recent in 1998. Many were prostitutes or runaways, and the first victims turned up in the Green River, giving the killer his name.

Earlier Thursday, relatives of victims poured out decades of pain, anger and loss as they confronted Ridgway.

"Jesus knows you have broken my heart," a sobbing Joan Mackie, mother of victim Cindy Smith, told Ridgway as he faced her and listened silently.

Most of the relatives sobbed, some shook with anger as they tried to describe the inexpressible grief of having a mother, daughter or sister disappear at his hands.

"It was not your right to decide who lived and who died," said Tim Meehan, the brother of Mary Meehan, whose body was found Nov. 13, 1983. "Mary was no less a human being than your mother or your son, or as trash as you have classified all the victims."

"It's garbage like you, not these victims that you took their lives, that doesn't deserve to live on," he said. "I can only hope that someday someone gets the opportunity to choke you unconscious 48 times so you can live through the horror that you put our mothers and our daughters through."

As each family member spoke of their sadness and rage, Ridgway maintained a blank stare, though he sometimes nodded at their comments and a few times, dabbed away a tear that slipped out beneath his dark-rimmed glasses.

Later, he told the court, "I'm sorry for killing all those young ladies."

"I have tried for a long time to keep from killing any ladies," Ridgway said. "I'm very sorry for the ladies that were not found. May they rest in peace. They need a better place than where I gave them. I'm sorry for killing these ladies. They had their whole lives ahead of them. I'm sorry for causing so much pain to so many families."

Kathy Mills, the mother of victim Opal Mills, 16, whose body was found Aug. 15, 1982, was able to offer Ridgway her forgiveness.

"We wanted to see you die, but it's all going to be over now," said Kathy Mills, "Gary Leon Ridgway, I forgive you. I forgive you. You can't hold me anymore. I'm through with you. I have a peace that is beyond human understanding."

In his confession, Ridgway said he killed because he hated prostitutes and didn't want to pay them for sex and that he killed so many women he had a hard time keeping them straight.

J. Norman, the mother of Shawnda Leea Summers, whose body was found Aug. 11, 1983, said prosecutors should not have bargained with the death penalty to get Ridgway's guilty plea.

"The politicians, if they cared about this heinous crime, it would have been solved 20 years ago," Norman said. "There shouldn't have been no plea bargain. ... Shame on Seattle."

As he entered the courthouse Thursday, King County Sheriff Dave Reichert, one of the first detectives to investigate the killings, said he wouldn't put much credence in any remorse Ridgway might show.

"He's a psychopath and a pathological liar," he said.

Ridgway was arrested Nov. 30, 2001, after detectives linked his DNA to sperm found in three of the earliest victims. By spring 2002, prosecutors had charged him with seven murders, but they had all but given up hope of linking him to the dozens of other women, most of who disappeared during a terrifying stretch from 1982-84.

Last spring, defense attorneys offered King County Prosecutor Norm Maleng a deal: If Maleng would not seek the death penalty; Ridgway would help solve those other cases. Though Maleng had previously said he would not bargain with the death penalty, he changed his mind, saying that a strong principle of justice is to know the truth.