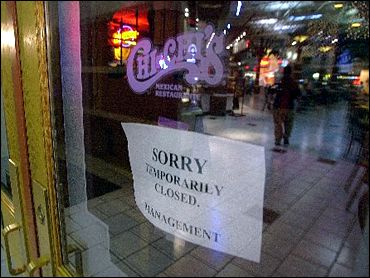 The cause of a hepatitis A outbreak in western Pennsylvania remained unclear as the number of people sickened rose to 410, but the Mexican restaurant chain that owns the eatery where the outbreak began said it was pulling green onions from all its outlets as a precaution.
Louisville, Ky.-based Chi Chi's announced Thursday that it was removing green onions from every garnish, salsa and cooked dish that it offers at its 100 restaurants across the East and Midwest.

Chief Operating Officer Bill Zavertnik said in a statement Thursday night the company made the change because green onions are "the prime suspect of recent hepatitis A outbreaks in various other states."

Officials initially believed the infectious liver disease was spread by a Chi-Chi's Restaurant employee who failed to wash his hands before touching food at the restaurant about 25 miles northwest of Pittsburgh.

However, Pennsylvania health officials say they are unable to determine the exact source of the outbreak, and are looking into a number of possibilities, including contaminated green onions that sickened people in Georgia, North Carolina and Tennessee in September.

Pennsylvania Health Department spokesman Jay Pagni told the Pittsburgh Tribune-Review for Friday's editions that some of the newest cases may have resulted from people passing the virus to others who hadn't eaten at the restaurant.

Dineen Wieczorek, 52, of Hopewell Township, died in a Cleveland hospital Wednesday night, less than a week after she was diagnosed with hepatitis A, Darleen Trunzo told The Associated Press. Health officials Thursday could not immediately confirm that the death was connected to the outbreak.

Chi-Chi's voluntarily closed the restaurant early this month and has agreed to keep it closed until Jan. 2. No other Chi Chi's location has been involved in the outbreak, the company said.

Hepatitis A causes flu-like symptoms that may include fever, nausea, diarrhea, jaundice, fatigue, abdominal pain and loss of appetite. The infectious liver disease usually clears up in about two months.