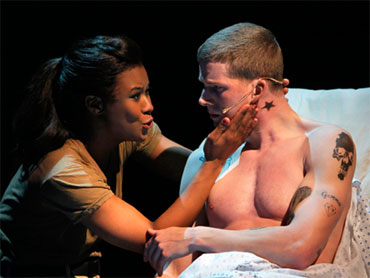 When you think about it, the term "rock opera" is an oxymoron, and unlike "live recording" or "casual sex," it's one not typically found on the to-do lists of award-winning, billboard-topping musicians.

Rock operas are generally cheesy. They add an unnecessary element (storytelling) to an already difficult equation (a good album). Plus, while a bad album just sort of disappears, a bad rock opera can haunt a musician for life. Just ask Garth Brooks or, um, Chris Gaines.

But in 2004, punk rock band Green Day released one.

The Iraq War had just begun, and they were inspired to make some sort of statement beyond their normal antics. A generation that had grown up on a couch was now being shipped off to war. Were those their only two options? "American Idiot," Green Day's seventh release, followed the misadventures of "Jesus of Suburbia," a guy who leaves his angst-filled suburb for the proverbial Big City, only to uncover more angst, along with sex, drugs and -- here's the catch -- punk rock and roll.

The album exploded. It sold 267,000 copies in its first week. It won a Grammy for Best Rock Album. It stayed on the Billboard 200 chart for 101 weeks. It went platinum five times.

Broadway conjures images of fanny packs and overpriced tickets, of dancing lions and that guy from "Frasier." Plenty of people were confused by Green Day's decision, and rightly so. In fact, it revived the endless debate that music critics and slackers alike love and miss, one that first surfaced in 1994 when the band signed with a major record label, continued as they dared to strum an acoustic guitar, plodded along through their various incarnations (punk rock, pop punk, alternative rock) and finally peaked in 2007 when the band performed on "American Idol": Has Green Day sold out?

Who knows. But the better question is, who cares? When the curtain rises over "American Idiot," the image of first-term George W. Bush appears on the many television screens littering the set's walls. It's hard to believe the story that unfolds is only seven years old and was sparked by a war we are still fighting. As the cast runs around with blue hair and too many piercings, the whole "punk" thing just seems very dated, unimportant even.

Then the music begins and I remember why Green Day sold over 15 million copies of "American Idiot" -- it's a really good album. Broadway's best young voices give the band some serious competition, John Gallagher, Jr. ("Spring Awakening") and Stark Sands ("Flags of Our Fathers") being the most notable. Songs once worn out by your local FM station are made new again, and though a true Green Day fan would never say it, I will: some sound even better than the originals. "Boulevard of Broken Dreams," a familiar and measured rock song, is transformed into something much more haunting and layered.

For the most part, director Michael Mayer ("Spring Awakening") knows what he's doing. He took the original "Jesus of Suburbia" and split him into three characters for the musical, each battling his own demon: a pregnant girlfriend, drug addiction and, of course, the war. The speaking parts are limited; "American Idiot" really is all about the music. So if you can get past the facts -- rock operas are weird, Green Day sold out, punk is dead --you might just enjoy yourself.